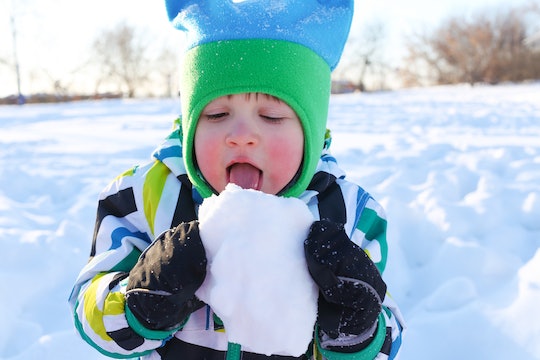 This winter has been intense. The polar vortex brought record-breaking low temperatures in the Midwest, and freezing temperatures throughout the country. Currently, there are 21 deaths attributed to this deadly cold front. While the worst is (supposedly) behind us, there is still plenty of winter left to come. If you or your little one develops frostbite, how exactly are you supposed to treat it? Is Vaseline good for frostbite? What about hot water? It's important to treat frostbite promptly and carefully, so it's crucial to know how to handle it before it happens so that you're prepared.

First and foremost... what exactly is frostbite? "Frostbite refers to the freezing of body tissue (usually skin) that results when the blood vessels contract, reducing blood flow and oxygen to the affected body parts," explained WebMD. "Normal sensation is lost, and color changes also occur in these tissues." It usually results after spending an extended period of time in extreme cold weather, particularly with low wind chills. Typically, frostbite occurs in the appendages, like your fingers, toes, and even ears.

If you take away one thing from this article, make it this: superficial and severe frostbite require immediate medical attention. Leaving either forms of frostbite untreated can result in serious and permanent issues from tissue death to amputation, according to the CDC. If you suspect you or your child has frostbite, don't waste any time getting seen by a medical professional. It's always better to be safe than sorry.

In other words, the only form of frostbite you should be treating at home is the lowest level, least severe frostnip. If you've come in from the cold and noticed reddened skin that has gone slightly numb, the first thing to do is remove wet or cold clothing and focus on warming up, ideally with warm water. "The main treatment is rewarming," Dr. Jacob Brady, resident physician at the University of Washington, tells Romper. "After you're out of the cold and rewarmed, you could have some superficial skin sloughing, which you'd treat like any wound." In other words, this is the time when a bit of Vaseline, or similar substance like Aquaphor, could come in handy. If the main symptoms of your frostnip, like discoloration and numbness, easily resolve, " a simple dressing of skin salve, ointment (antibiotic ointment, diaper rash ointment, or Vaseline) with a soft sterile gauze dressing is sufficient for full resolution of symptoms over 12-24 hours," instructed University Health News Daily. The Vaseline will help sooth skin that has been irritated by the cold weather, while simultaneously locking in moisture.

Of course, the only thing better than promptly and effectively treating frostnip and frostbite is preventing it altogether. Whenever you're venturing out into cold weather, take care to make sure you're wearing appropriate clothing. Pay special attention to your extremities, making sure to wear gloves, warm socks, and hats. On those painfully cold days with freezing wind, cover as much of your face as you safely can with a mask or scarf. Change your socks quickly and regularly if they get wet. The American Academy of Dermatology additionally instructs, "Becoming dehydrated also increases the risk of developing frostbite. Even if you are not thirsty, drink at least one glass of water before you head outside."

It can be alarming to observe red, irritated skin on yourself or on your child after spending time in the cold. However, the prognosis for frostbite is generally good as long as the appropriate actions are taken. Rewarming and treating with Vaseline can be an effective course of action for frostnip, while frostbite demands professional medical attention.