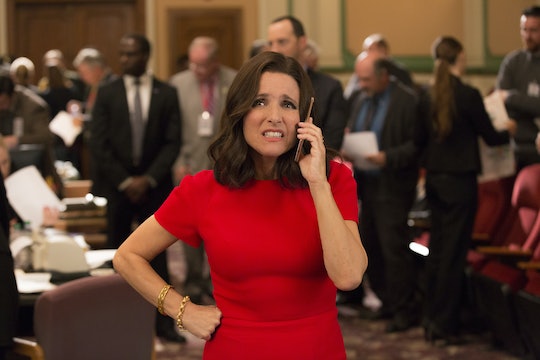 'Veep' May Not Be A VIP At This Year's Emmys

Some TV shows are so good that they make you feel personally invested, like you’re a part of their team. So when your favorite shows get recognized for their outstanding achievements, you can’t help but cheer with pride. At least for me, one such show is Veep. And over the years it has enjoyed its fair share of success and acclaim. But now that the series is winding down, fans are wondering, is Veep eligible for the Emmys this year?

Unfortunately, Veep will not be eligible to receive an Emmy nomination this year, because Season 7 has not yet aired, and the cut-off date for Emmy eligibility was May 31. One of the show’s stars, Matt Walsh, who plays harried publicist Mike McLintock, told Entertainment Weekly that production will actually begin sometime in autumn this year, and will likely air sometime in 2019. Now if Season 7 airs before May 31 of next year, Veep will likely sweep up at least a few Emmy awards in 2019.

Veep has been a favorite at the Emmys since it began airing in 2012. In fact, along with the accolades for direction and the supporting cast, actress Julia Louis-Dreyfus made history by winning the Outstanding Lead Actress in a Comedy Series Emmy six consecutive years in a row for Veep. Unfortunately, after season six, production was put on hiatus due to Louis-Dreyfus' breast cancer diagnosis and treatment. She announced her diagnosis on Twitter last September:

Luckily, Louis-Dreyfus has been recovering well, and posted a beautiful Valentine’s Day Instagram photo with the caption “Hoorah! Great doctors, great results, feeling happy and ready to rock after surgery. Hey cancer, ‘F–k you!’ Here’s my first post-op photo.” In the last few weeks, she’s been posting amazing photos from her Hawaiian vacation, and looks beautiful, healthy, and happy.

In an interview with ET, Veep star Tony Hale said that Dreyfus is doing well and the entire cast would be ready to shoot Season 7 sometime in August. “She’s going through her own journey, and man, we’ve been talking off and on,” said Hale. “But we’re going to be ready to shoot in the summer.”

While Veep isn’t eligible this awards season, its absence does give other comedy shows and actors a chance at winning an Emmy this year. I’m rooting for a nomination for Amazon’s The Marvelous Mrs. Maisel and its lead actress Rachel Brosnahan, who nabbed a Golden Globe for her performance as the housewife-turned-standup-comedian earlier this year.

Other comedy shows that are in the running are older shows like Modern Family, Unbreakable Kimmy Schmidt, and Atlanta, which won Donald Glover Emmys for acting and directing last year. Some of the newer shows, including HBO’s Barry and Netflix’s reboot of One Day at a Time, may also get nods this year, along with relatively young shows like GLOW and Dear White People. With Veep out of the running this year, the door has been left wide open for other comedy series, but until the Emmy nominations are revealed, it’s all a matter of speculation.

So if you’re a fan of Veep, you may be disheartened that you won’t see your favorite show making its mark at the Emmys this year, but why not think of it as an excuse to check out one of the other contenders on the Emmy nomination list? You never know, you may just end up finding another team to root for this time around. Plus, with all the wins you’ve enjoyed over the last six years, I’m sure you have enough steam to keep you going until next year.