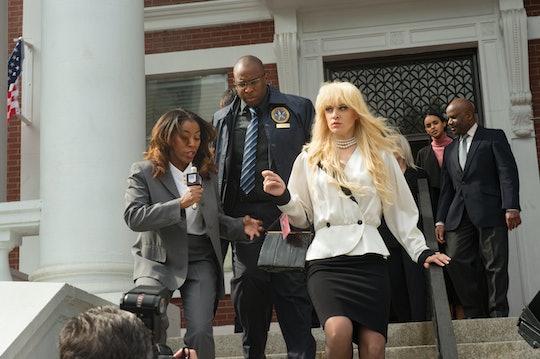 Take A Trip To The '80s In 'Victoria Gotti: My Father's Daughter'

When Victoria Gotti: My Father's Daughter premieres on Lifetime on Feb. 9, it promises to deliver a staggering array of wigs and 1980s fashion, not to mention more than a few New Yawk accents. Its title is likely a tipoff, but if you're unfamiliar with the history of Mafia families in the Tri-state area, then you might be wondering if Victoria Gotti: My Father's Daughter is a true story.

It absolutely is, and you can trust in its accuracy because Victoria Gotti went straight to the source when crafting its script. It's narrated by the real Victoria Gotti, much like recent Lifetime movie I Am Elizabeth Smart was narrated by its eponymous heroine. Gotti also served as executive producer. Since she'll be giving voice to her own story, viewers are guaranteed to get her point of view on growing up the child of mob boss John Gotti.

But who is John Gotti? Per the New York Times, he was the head of the Gambino crime family in New York City in the late 1980s. Victoria was one of his five children, and now she's telling her side of the story for Lifetime. The summary for Victoria Gotti hints at her conflicting upbringing: though her father's position brought glamour and excitement to the family, it also led to heartbreak and struggle.

Victoria will be portrayed by Chelsea Frei, with Maurice Benard playing the role of her father. It will span much of her life and familial relationships, focusing especially on the father she both loved deeply and occasionally clashed with. The film covers her younger brother Frank's tragic death, as well as Victoria's rocky romance with Carmine Agnello, a man her father disapproved of. Since it was adapted from Victoria's memoir This Family of Mine: What It was Like Growing Up Gotti, on top of having so much influence from her personally, it's sure to express her perspective on everything her family has dealt with.

Victoria told Page Six that she was hopeful the Lifetime movie would clear up some misconceptions about the Gottis, though she hadn't seen the final cut at the time. She felt it showed a new side of her father, one that wasn't entirely glowing; her conflict with John was depicted even though she still had affection for him. And she was aware that not everyone would share her interpretation of events.

"I think everyone has their own view on how things are played out," Victoria said. "I think at the end of the day it's interesting how each child or each person views their life or their relationship with different people."

Victoria Gotti is a true story in that it is based on real people and real events, but it's still filtered through one person's experience. That means it may be colored by how Victoria viewed things, though her insider knowledge means it's still a close and personal look at the Gotti family. It could offer a unique take on a story people might think they already know.

This article was originally published on Feb. 7, 2019