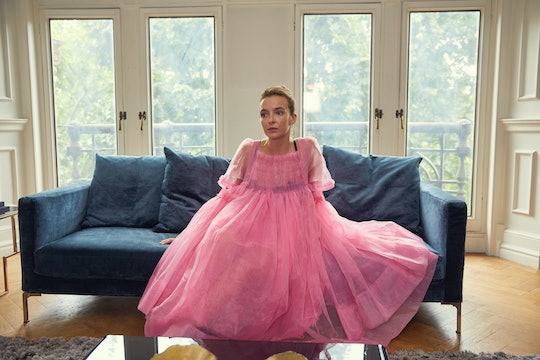 Villanelle Is Not One To Be Messed With On 'Killing Eve'

If you're into intense thrillers then BBC America has the perfect show for you. The network's new series, Killing Eve, follows two women in a cat and mouse game. First, there's the titular character Eve Polastri (Sandra Oh), who's working a desk job at M15, and then there's Villanelle (Jodie Comer), the highly skilled assassin Eve is tracking. Although spies certainly exist, it's hard to believe there are those whose sole purpose is to kill, leaving some to wonder: is Villanelle from Killing Eve based on a real person? Thankfully, it doesn't appear that way.

All she knew about the people who paid her was that they were called The Twelve and Konstantin (the man who saved her) was the one she answered to. Besides that, Villanelle knew nothing about The Twelve and didn't really care to learn more about them.

Right now it's hard to say just how much of Villanelle's backstory will be carried over into the TV series. She's obviously still an assassin and her handler Konstantin will also be in the show, played by Kim Bodnia, but besides that not much is known about Villanelle right now. According to her character bio on the show's website, "Villanelle possesses a cold brutality under her innocent-looking exterior." She is classified as a "killing psychopath" who kills with no conscience and with flare. She's paid quite well for her killing jobs, which is what motivates her to do her job as well as she does. Currently she resides in Paris and prior to becoming a killer she had nothing.

Although she's a skilled assassin, she can also sometimes be impulsive, which could be her downfall, especially with Eve tracking her every move. While Eve may just be working the desk at her job right now, she actually has a degree in criminal psychology and was always fascinated by women in crime. For her, tracking down Villanelle gives her something exciting to focus on in her otherwise mundane life. Additionally, if Eve tracks Villanelle down, she could uncover more about the shady organization Villanelle works for. That would definitely lead to a promotion for Eve.

But when it comes to Villanelle and Eve, one has to wonder who's really the one being chased. Does Eve have what it takes to take down Villanelle or will Eve end up being the one hunted down instead? It's much too early to make that call, but based on the trailer it's clear the relationship between these two women will be complicated, which will only make this show more fun to watch.

The series has already gotten great reviews with TVLine calling it a "wickedly clever thriller with two killer performances," and StarsNews claiming it's a "masterful thriller steered by two superb performances." People are already buzzing about it on social media since the first episode is already available online and many Grey's Anatomy fans are excited to see Oh back on the small screen in this new role.

You can see Killing Eve when it premieres on Sunday, April 8 at 8 p.m. EST on BBC America.