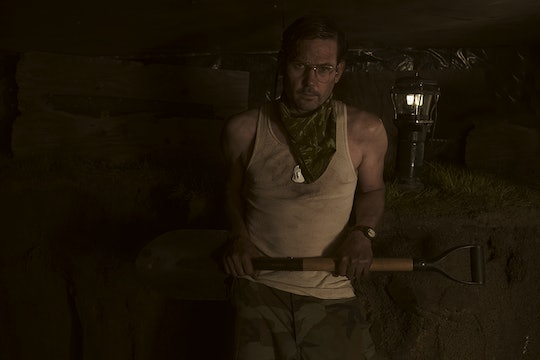 Here's What Happened To Vinson Filyaw After His Kidnapping Arrest

The Lifetime original movie Girl in the Bunker tells the true story of fourteen-year-old Elizabeth Shoaf's abduction by Vinson Filyaw in 2006. He held her captive in an underground bunker for ten days, but Shoaf was eventually able to use his phone to contact her mom. That led to Filyaw's arrest and conviction for his crimes. But is Vinson Filyaw still in jail?

Filyaw is absolutely still behind bars, and there's no indication that he'll be released anytime soon either. He was sentenced to four hundred and twenty-one years in prison for kidnapping, ten counts of criminal sexual conduct, possession of an incendiary device, and one count of impersonating a police officer. He had pretended to be a cop when he initially approached Shoaf as she walked home for school, fabricating drug charges so he could pretend to arrest her. He put her in handcuffs and fastened a device around her neck that he claimed was a bomb; when he brought her back to the bunker, he told her that it was also rigged with explosives that would go off if she tried to leave.

He kept Shoaf chained within the bunker, at least at first. He raped and tormented her for days, but slowly Shoaf attempted to talk to him and get him to trust her. That allowed her access to his phone, which guaranteed her escape.

It also guaranteed that Filyaw would be caught. He had been following the investigation into Shoaf's disappearance on television; making her watch her parents go on TV and talk about their desperate search for her was another psychological cruelty he subjected Shoaf to. She told MS News Now in 2013, "I had to sit there and watch my family on the news. Each time WIS came on I got to see my mom and dad crying, begging to see me. It was more or less torture. I never had a break."

But his close watch on the case meant that he found out about Shoaf's text to her mother as soon as it was publicly reported on. He was angry with her, but also didn't know what to do. He ended up asking his teenage victim for advice. Shoaf encouraged him to run to avoid imprisonment, which gave her the chance to run to freedom. But Filyaw was arrested anyway, five miles away from the wooded area where his bunker was located.

Filyaw was not the only one apprehended. The Washington Post reported in 2006 that his mother, Ginger Nell Cobb, and common-law wife, Cynthia Hall, were also arrested for aiding and abetting, because they provided Filyaw with "food, water, and other supplies" to keep the bunker stocked. He had been hiding out there to avoid an arrest warrant for another sexual assault, that of an unnamed 12 year old girl.

Filyaw pled guilty to all charges, though it's unclear if he ever went to trial for the assault of the first young girl. According to NBC News, he shared a statement with the court in which he said there was nothing he could do to erase the pain he caused the entire Shoaf family; he knew he would be spending the rest of his life in jail.

In his statement, Filyaw said that he "couldn't be mad" at Shoaf for alerting her mother, because "she had done what any person in her situation would have done and probably better!" He admitted that she had defeated him, and he felt surrendering to the authorities was his best option because, in his words: "If I gave up, I would have full medical coverage, three meals a day, and never have to work again."

Shoaf's parents were hoping for a lengthy sentence, according to NBC News, and Judge G. Thomas Cooper seemed to be on the same page. Before sentencing Filyaw to his four centuries of jail time, Cooper said:

I have a strong belief you have forfeited your right to be a member of this society. I can think of no crimes short of murder more repulsive than these.

Filyaw is currently serving time in the Maximum Security Unit at Kirkland Correctional Institution, where he will remain until his final days.