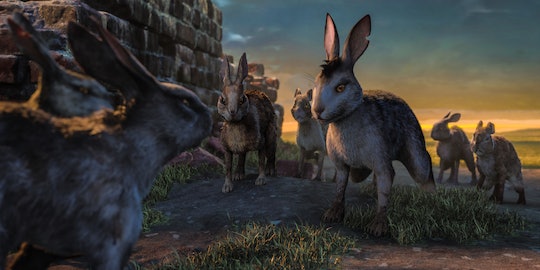 You Actually ~Can~ Watch Netflix's 'Watership Down' With Your Kids

Netflix’s new miniseries, Watership Down, is bringing 1970’s classic back for a new generation. Sure, the series looks like it’s about sweet little bunnies, but if you’ve seen the 1978 movie, you know just how scary this story can be. If you’ve heard about all the gore and violence in the cartoon original, you may be wondering, is Watership Down appropriate for young kids?

According to Netflix, Watership Down has a rating of TV-PG, which means it may require parental guidance for younger children. Common Sense Media — who rated the series appropriate for children ages 11 and up — noted that the series contains scenes in which the bunnies face violence, fear, and death, including a scene where they are being shot at. If you think these scenes might be too scary for your kids, it may be a good idea to watch it beforehand and judge for yourself.

Watership Down is based on Richard Adam’s 1972 novel, which tells a powerful story about a group of rabbits who flee the dangers of their home to find a new one. They find themselves on an epic journey, facing animal predators, humans, and other environmental threats. The book was famously adapted into an animated film in 1978, and while that film was given a U-rating (for everyone), it featured scenes that has since traumatized generations of children. The 1978 movie included scenes in which rabbits were being gassed out of their homes, being brutally eaten by predators, choking on snares, and one scene in which one rabbit rips another rabbit’s throat out. Yikes is right.

But, according to Watership Down executive producer, Rory Aiken, the new Netflix series won’t be as gory as the 1978 film. In an interview with the Telegraph, Aiken said that he wanted the series to stick to the adventurous message of the book, without any added gore. “The thing about Watership Down is that it’s an epic adventure story, it’s not a terrifying, brutal story,” said Aiken. “I think that in a way we want to restore the reputation that the book should have as one of the great adventure stories of all time — While we won’t shy away from the darkness in the book, visually it won’t be as brutal and scarring.”

Aiken explained that the series format allowed the new version to touch on many elements of the book that the 90-minute original film left out, including the prominence of heroic female characters. “It was a 400 page book distilled heavily into the 90-minute film, and suddenly we had the potential to make this on a much broader canvas over four hours of television,” he told the outlet.

Aiken hopes to reignite love for this epic adventure with a new generation, but he noted that it’s still a mature story that should be watched as a family. “It’s a great opportunity, and the generation who grew up with Watership Down are now able to bring it to the younger generation,” Aiken told the Telegraph. “The idea is to bring it to a wider family audience. While Watership Down is never going to be for young children, it will be for the whole family to watch together.”

In a trailer for Watership Down, you can get a sense of how intense the series is. But if you are still concerned, watching it beforehand is your best bet. This way you’ll be prepared for its violent scenes, and you’ll have time to figure out exactly how you want to explain them to your kids.

Watership Down is currently streaming on Netflix.