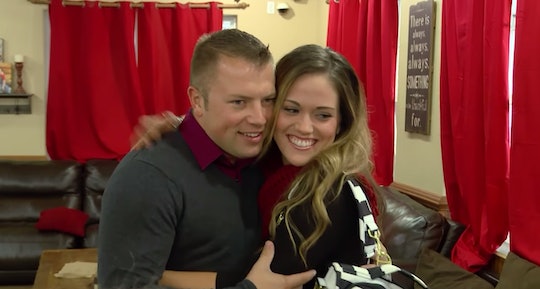 Is Whitney Bates Having A Boy Or A Girl? The Mom's 3rd Child Is Due This Fall

If you're familiar with 19 Kids & Counting or Counting On, then chances are you've heard of the Bates family because they're equally as large and religious. What's more? Parents Gil and Kelly Jo Bates (who are actually friends with the Duggars) have previously appeared on 19 Kids & Counting, traveling to Arkansas from Tennessee where they raise their 19 children. And similarly to the Duggars, the Bates' adult children are busy building families of their own. And fans of Bringing Up Bates might be wondering: Is Whitney Bates having a boy or a girl?

As a refresher, Whitney is married to Zach Bates, the oldest child of Gil and Kelly Jo. The couple already has a 4-year-old son, Bradley Gilvin, and a 3-year-old daughter, Kaci Lynn. In May, Zach and Whitney revealed that they're expecting their third child following a miscarriage, according to People.

“There are no words to describe the excitement under our little roof as we anxiously await a new little baby!” Whitney told People at the time. “Last summer Zach and I experienced a miscarriage. Though our hearts were broken, we put all our trust in God. Now, we are all flooded with joy and gratefulness! The main topic around the house has been about the new baby coming and whose gets to hold it first!”

It was in July when Whitney revealed the sex of her third child, according to Hollywood Life. And she did so with a double sex reveal with sister-in-law Erin Paine, who is due with her fourth child in December.

"It’s raining GIRLS!!!!!" Whitney wrote alongside a photo of herself and Erin cradling their bumps. "Our baby girl, Khloé Eileen is due in November and my sweet niece will be here in December!!!"

She continued, "We are overwhelmed with the support we have received from people on social media and thank everyone for their kind words and prayers. These two girls are already so loved and cherished by their older brothers and sisters. They can’t wait to meet them both and shower them with hugs and kisses!"

The impending arrival of Zach and Whitney's daughter is that much sweeter, considering she is a rainbow baby aka a child born after the loss of a pregnancy or infant. Zach and Whitney commemorated the pregnancy loss in August 2018 by planting a dogwood tree in their yard, according to the Knoxville News Sentinel. "The tree is just a significant reminder of not just the bad times, but also how good God is to us," Whitney explained during an episode of Bringing Up Bates.

Zach also expressed hope for the future, adding, "And I have full faith, you know, that we will see that child again, and that's all you can go on when you're hurting sometimes, looking ahead to that hope."

Now that Whitney and Zach have found healing after their miscarriage, they're ready to welcome their third child, a girl, in November. And it's clear how much the family already loves little Khloé Eileen.