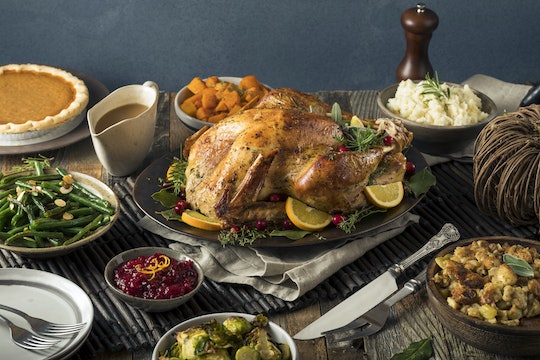 These Are Whole Foods' Thanksgiving Hours, In Case You Need A Last-Minute Item

If you're anything like me, the frenzy of Thanksgiving will catch up with you, and come Thursday morning, you'll realize you're missing a few special ingredients. But will Whole Foods be open on Thanksgiving 2019? They have so many holiday offerings this time of year.

A Whole Foods customer service representative tells Romper that they will be open for the most part on Thanksgiving, though specific hours will vary a bit nationwide. Typically they close in the afternoon on the last Thursday of the month (the Blossom Hill location in San Jose, CA, for example, will be open from 7 a.m. to 2 p.m. on November 28. It's worth noting some locations will likely close a bit later (an hour or so) on the Wednesday before Thanksgiving, as Blossom Hill's hours show. Basically, because each Whole Foods location has different daily hours, the hours on Thanksgiving also vary from store to store.

While most people (myself included) would like to think that they can snag everything they need in advance for cooking a huge Thanksgiving dinner, there's always that one thing you absolutely need that you initially forget. There's also always that one annoying family member who won't stop hovering over you in the kitchen. So feel free to send cousin Craig out for another bag of sugar, because Whole Foods' doors should be open during most of your prime cooking time.

More Like This
20 Best Gifts For Stepmoms
12 Last-Minute Vacation Spots For Memorial Day
19 Gifts College Grads Will Love & Actually Use
From Captions To Gifts, These Are All The Kindergarten Graduation Ideas You Need

This article was originally published on November 11, 2018