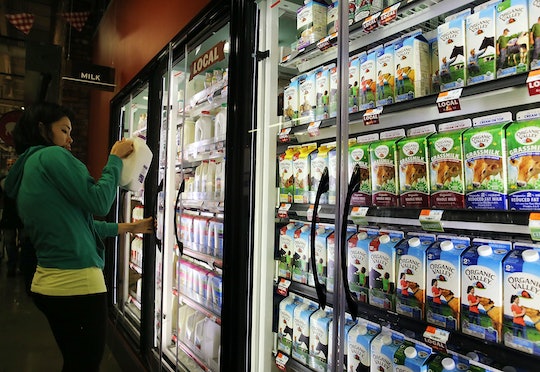 Here's Who Can Apply For WIC Benefits

As you're likely aware, President Donald Trump has released his preliminary plan for a 2018 budget. And, as you also probably know, the budget has received stark criticism from both sides of the aisle for gutting programs that thousands rely on. One of the programs that's been mentioned in various discussions is the Women, Infants, and Children subset of the United States Department of Agriculture (WIC). Although the program remains safe for now, barring any sudden influx in enrollees, it's important to understand all the nuances of the program anyway, to remember why it's so important and worthy of continued funding. So, is WIC only for single mothers? Truth be told, it's a valuable resource for many across America, not just single-parent households.

As part of the USDA's Food and Nutrition Service, WIC seeks to provide "federal grants to States for supplemental foods, health care referrals, and nutrition education for low-income pregnant, breastfeeding, and non-breastfeeding postpartum women, and to infants and children up to age five who are found to be at nutritional risk." Mothers can receive WIC benefits for up to one year, depending on extenuating circumstances, but can reapply if they need. And while the program is based on income, among other factors, its title is quite clear as to who it seeks to provide assistance for: women, infants, and children (5 and under). In other words, families who need help.

So, no, WIC is not purely for single mothers. As long as a woman is either pregnant, breastfeeding, or in the postpartum period of their pregnancy, they are considered eligible for WIC benefits — although income, residential, and nutritional requirements must also be met.

Women must live in the state in which they are applying for WIC benefits, as well as pose some sort of nutritional risk to themselves and/or their children. In order to determine nutritional risk, "Applicants must be seen by a health professional such as a physician, nurse, or nutritionist who must determine whether the individual is at nutrition risk," but a WIC representative noted that this nutritionist can be provided by WIC.

The truth is, that contrary to Trump's and other conservatives' beliefs, WIC is not merely a service that exists to provide for freeloaders. It is an important program that works to assist marginalized members of society, and help mothers give themselves, and their children, the proper nutrition, supplements, and care that they need–and deserve. Thankfully for now, despite a $150 million decrease in funding, officials don't believe the WIC program will be hurt, but if people don't learn its value, in the future, that could change.