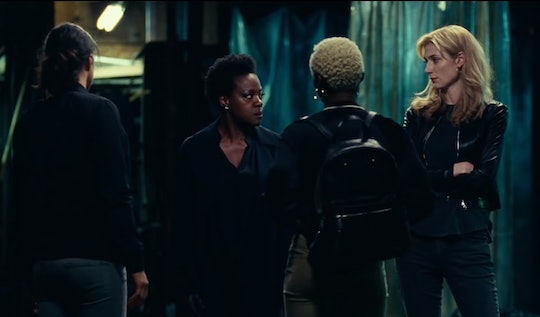 'Widows' Tells A Thrilling Story, But Is It Based On A True Story?

There’s nothing more satisfying than seeing a group of smart, hard-working, talented women get their due, even when it’s on screen. That’s why director Steve McQueen’s latest movie, Widows, is such a welcome entry into the end-of-year movie season. But once you see it, you might be wondering if Widows is based on a true story and if it's inspired by real women? Or... do these enterprising ladies exist only in fiction?

Well, enterprising women exist everywhere, but thankfully for the sake of the story, this quartet is entirely contrived. Widows follows four women who come together when their husbands, who were criminals, die during a robbery, according to IMDb. Saddled with a $2 million debt owed to the man their husbands robbed, the group embark on an ambitious plan to perform a first-and-last ever heist of their own. Of course, things never go that simply.

According to The A.V. Club, this is no Oceans 8; these women have no experience with the underworld, let alone resources that make for snappy montage sequences of preparation. The only thing they have going for them is surprise, and the knowledge that nobody is going to be looking at them as suspects, as The A.V. Club explained.

But the film is so much more than just a heist movie — albeit a good one at that, according to reviews so far.

John Nugent, reviewing for Empire, said, “What starts as a lean revenge potboiler quickly expands into a sprawling treatise on modern-day America.” And if that isn’t your cup of tea, don’t write the film off just yet: it’s as commercially entertaining as it highbrow, according to Empire.

Viola Davis heads up the team of would-be thieves in a performance that the Wall Street Journal calls “the capstone, thus far” of her career. She’s joined by Michelle Rodriguez and Elizabeth Debicki as the titular widows, alongside Daniel Kaluuya, Jacki Weaver, Lukas Haas, and Colin Farrell. “One fascinating character after another takes the stage, if only briefly,” lauds the WSJ.

Steve McQueen, director of 12 Years A Slave, wrote the screenplay alongside Gone Girl writer Gillian Flynn, according to the film’s IMDb page. The story is based off a British miniseries from the 1980s which, although it sounds like an unlikely inspiration, seems to work here. Empire noted that although McQueen once filmed a 17-minute single-take shot for 2008’s Hunger, it seems like he's out to prove that he’s as able to handle action as any Michael Bay. “On this evidence: he’s not wrong,” as Empire explained.

So, should you gather up the whole family and head out to see Widows this holiday season? You might want to give that some consideration. It is rated R for violence, language, and sexual content/nudity, according to the film’s IMDb page.

But you could easily call together a group of your best girlfriends and go into Widows knowing you’re getting smart, interesting storytelling with a serious punch of action, if that’s your thing. And rest easy, knowing that while there are certainly many women capable of this kind of work, this story isn’t based on any of them.