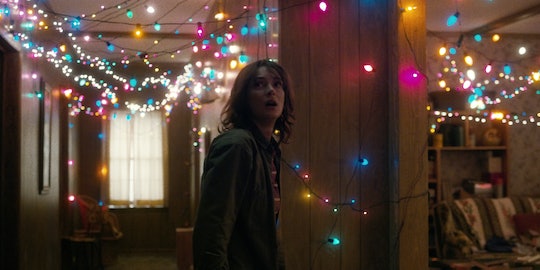 Is Will Really Dead On 'Stranger Things'? The New Netflix Series Will Keep You Guessing

(Warning: This post contains spoilers from Episode 4 of Stranger Things.) As soon as Will Byers disappears on Stranger Things, his fate becomes one of the biggest questions of the series. It's uncertain whether Will was killed or taken, though the town definitely seems to believe he's dead. His mother Joyce is convinced that he's alive and out there somewhere finding unusual ways to communicate with her. She believes Will speaks to her through the lights in their house, blinking them once for yes and twice for no. It's the kind of thing that could be real, or could be Joyce spiraling as she grapples with the loss of her son. When Will's body is discovered in a local lake, it certainly seems like she's just unhinged. But things aren't what they seem on this show – not even close. So is Will really dead on Stranger Things?

Will's bizarre communications with Joyce are just one of many strange things on Stranger Things. The way he vanished left the situation very open to interpretation; he was there one minute and gone the next without leaving very many clues behind to follow. The discovery of his body felt like a definitive, realistic end to Will's story, but that was only the midpoint of the season. It was far from the end.

When gruff police chief Hopper goes to the morgue, things seem off immediately. The usual medical examiner hadn't performed the autopsy; instead it was someone Hopper didn't know, which sent up red flags. Hopper decided to investigate, sneaking in and beginning the autopsy himself, but when he cut open Will's body he found something shocking: it was a fake. Will's body was rubber and inside it was filled with fluff. It was a major WTF moment that proved one thing for sure: whatever happened to Will, that body wasn't his.

Though it answers one question, the fake body opens up about a million more. Who would go to such lengths to prove that Will was dead? What happened to him that necessitated covering up of that degree? Where is Will, really? Is he being kept by someone or something? And just because the body was a fake, does that mean that Will is definitely still alive?

Will's ability to send messages to his mom doesn't confirm or deny anything, either. Ghosts can presumably send messages too, but if Will is dead then there wouldn't be any reason to cover up what happened to him by whipping up a stuffed version to throw people off the trail. The only group powerful and shady enough to do that is the nefarious Hawkins Lab, a place that clearly has no qualms about using children for experimental purposes. Whatever is going on in this town, they undoubtedly have a hand in it.