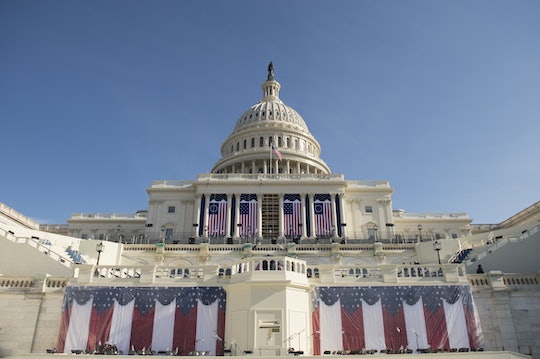 How To Get Women's March Merchandise

On Jan. 21, the day after President-elect Donald Trump is sworn in as the 45th American President, hundreds of thousands of women are planning to descend on the Capitol to make their voices, and opposition, to Trump's presidency heard. There's still time to make last-minute plans to get to Washington D.C. in time for the march, but what will you wear? Is Women's March merchandise still available? It may not get to you in time.

""The Women's March on Washington will send a bold message to our new government on their first day in office, and to the world that women's rights are human rights," the march's mission statement declares, according to CNN. "We stand together, recognizing that defending the most marginalized among us is defending all of us."

CNN reported that more than 200,000 people are expected to join the event and organizers want people to know it's not just women who will be marching — anyone opposed to Trump and his policies is welcome to join.

There are a slew of celebrities who have said they will attend the march in D.C. and many other sister marches planned around the country including Julianne Moore, Gloria Steinem, Amy Schumer, America Ferrera, and Chelsea Handler, who will be leading a march in Park City, Utah, according to CNN.

There are many places to score your Women's March merchandise, including from the organizer's official site, but beware, it's too late to get your swag before Saturday.

"NOTE: APPAREL PURCHASED NOW WILL NOT ARRIVE PRIOR TO MARCH DAY." the official site said. "All proceeds go to the Women's March on Washington."

But just because you can't wear the sweatshirt, t-shits, or onesies on Jan. 21, doesn't mean they're not still worth buying as cool collectors' items. CafePress has a whole section of shirts for the Women's March protest, which can be personalized for your individual city.

What could prove to be the most popular piece of march merchandise are the so-called "Pussyhats" being knitted across the country as a fashion protest against Trump's comments caught by Access Hollywood cameras, and reported on first by the Washington Post, about how he enjoys grabbing women by their genitals. The "Pussyhat Project" has uploaded a knit pattern so everyone can make their own. The project has even inspired Planned Parenthood CEO Cecile Richards to take a stab at knitting her own cat-eared pussyhat for the march.

It looks like after Richards' effort on the train, she still needed a little expert help making her own hat.

There are many others with Women's March merchandise of their own. Erin Lankau has made some pretty amazing "I Slay" stuff to declare your resistance to Trump with a little Beyoncé flair.

But again, anything ordered isn't going to make it to you before Saturday without a miracle and a huge shipping bill. Regardless of the look you put together, Jan. 21 should prove to be an historic day and one heck of a kickoff to the Trump Administration.