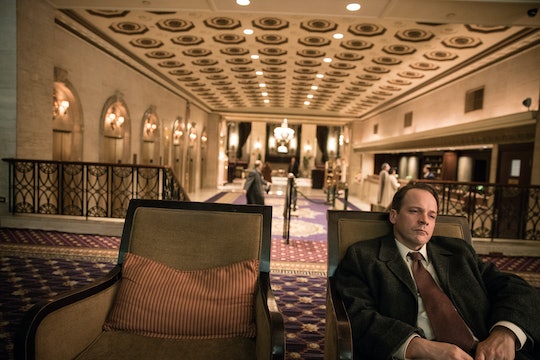 Netflix's new miniseries Wormwood centers around decades-long conspiracy theories surrounding the CIA and how they may have impacted the life of a man named Frank Rudolph Olson, played by Peter Sarsgaard. It tells the story using both real interviews as well as reenactments performed by actors, and those documentary elements certainly give it the ring of truth. But while Wormwood is based on a true story, it's important to remember that there are fictionalized elements thrown in as well. There are also many details about the real story that remain unconfirmed, making it impossible to declare their validity beyond a shadow of a doubt.

Olson was an Army scientist who was working with the CIA on a program called MK-Ultra when he died mysteriously, plummeting from a hotel window to his death in 1953. It was initially ruled a suicide, but then details began to emerge that threw that into question: first, that he had been unknowingly dosed with LSD by the CIA nine days before he died; second, that an autopsy performed on his body years later may have shown signs of homicide. His son Eric devoted much of his life to trying to find an answer to what really happened to Olson in that room.

Director Errol Morris had a similar goal. "All of Wormwood is an attempt to reconstruct that, to reconstruct the mystery of that black box, the four walls of that room and what transpired," he told People. "Was Frank Olson committing suicide, was this an accident or was it something else?"

In trying to understand a situation where finding concrete answers is impossible, Morris mixed facts and speculation. In an interview with Variety, Morris said, "I told [Netflix] I wanted to do something that combined straight drama, reenactments, archival research, various diverse graphics elements, and on and on and on. It wasn't going to be a documentary business as usual. It was going to be something different."

That involved exploring theories about what happened to Olson that may or may not be true. But for Morris, it wasn't about diving deep into conspiracy theories or even being able to come up with a solution, because the story contained too much uncertainty for that. In the same interview, Morris described Wormwood as "a story of a coverup, of a murder, of the pursuit of truth without the guarantee that the truth can be proved."

Olson's death occurred when his son Eric (shown above) was only nine years old and at the time it was accepted as a suicide. However, information released over the years put that in doubt. In 1975, a commission headed by Vice President Nelson Rockefeller led to revelations about illicit CIA behavior. The New York Times reprinted a quote from The Washington Post that mentioned that "a civilian employee of the Department of the Army unwittingly took LSD as part of a Central Intelligence Agency test" and later "developed serious side effects."

That employee went to New York City for treatment and then fell from a hotel window to his death, just like Olson. According to The Observer, Eric and his mother were able to confirm that the account was indeed about his father. They chose to sue the government for wrongful death. As a result, President Ford invited the Olsons to the White House and extended an apology; they were granted special CIA documents about the incident and received $750k in a settlement.

But the documents did not provide the answers Eric needed — in fact, they just raised more questions. He had his father's grave exhumed in 1994, which determined Olson had suffered a blow to the head before his fall. Conversations with Eric about his belief that his father was murdered, allegedly as part of a coverup relating to his work with the CIA, make up a large portion of Wormwood.

It's difficult to find the truth in a situation where the truth may have been purposefully obscured, but Wormwood appears to explore multiple options as it attempts to understand what happened to Frank Olson. Though I doubt we'll ever know for sure.