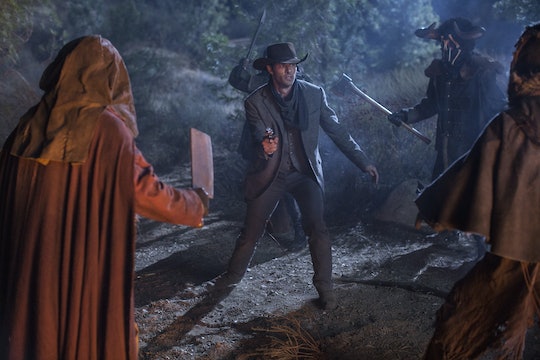 Is Wyatt A Robot On 'Westworld'? Dr. Ford Seems To Be Up To Something

In the first three episodes of Westworld, we've seen Teddy and Dolores go through the same story multiple times, but on Sunday's night episode "The Stray," Dr. Ford added something new to their story. Rather than making Teddy have some mysterious backstory that he can't really explain, Dr. Ford decided to fill in the blanks and give him a specific character arc that involves a new villain named Wyatt. One would assume Wyatt is a robot in Westworld since he's a creation of Dr. Ford... but is he?

After dismissing Lee Sizemore's new narrative idea, Dr. Ford told Bernard he had his own idea for a story and Wyatt and Teddy seem to be part of it. With the new backstory implanted into Teddy, he's taken on a new adventure, slightly away from Dolores and their seemingly doomed romance. Teddy, along with the sheriff and few other hosts and guests, embarked on the search for Wyatt, who has apparently shown back up in town. According to Teddy's flashbacks, he and Wyatt were soldiers together in the army until he lost his mind. Wyatt believed he heard the voice of God, and decided to take over the land they were meant to protect for himself. Forming his own kind of cult, he's seen as a very dark character that Teddy must destroy.

Although Wyatt definitely seems to be a product of Dr. Ford's creation and not a human, the idea of Wyatt seems to come from Dr. Ford's experience with his former partner, Arnold. As Dr. Ford told Bernard, Arnold was obsessed with trying to give the robots consciousness and tried to do so by giving them an internal monologue that would act like their own thoughts. However, his plan didn't work and the hosts ended up thinking they were hearing the voice of God, driving them insane, which sounds very similar to what happened to Wyatt.

Could Wyatt be one of the hosts that was driven insane and Dr. Ford is now bringing him back as part of his new narrative? This seems too reckless for Dr. Ford, who even warned Bernard against trying to give the hosts their own thoughts. If the hosts that Arnold tried to give their own consciousness to were put down, why would Dr. Ford bring any of them back?

It's possible Dr. Ford is just using the idea, but isn't actually using one of the hosts from that time. Either way, though, the timing of the new addition to Teddy's backstory and the reveal about Arnold seems a little too suspicious to ignore, so it's hard to believe the two aren't related somehow. We'll just have to wait and see what exactly Dr. Ford has planned.