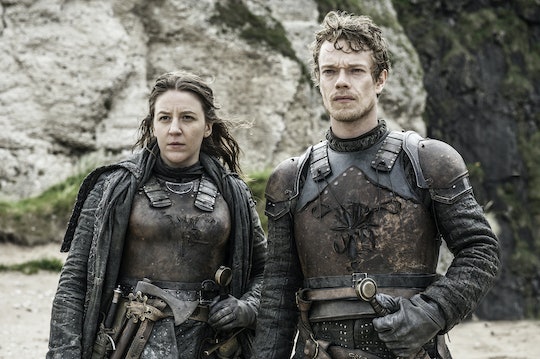 Is Yara Greyjoy A Lesbian? 'Game Of Thrones' Throws In A Surprise Queer Storyline

After making a bold claim to The Iron Islands and losing it, Yara and Theon Greyjoy have made off with the fleet. They land in a tavern, and we see Yara smooching a lady bar wench. So is Yara Greyjoy a lesbian? She's actually been queering sex and gender norms on Game of Thrones since the beginning.

As she's characterized in the books, Yara (or Asha, as she's known in the text) is one of the more sexually empowered women in the story — adventurous, aware of her desires, and not afraid to act on them. Early on in the show, we see her engage in some casual Game of Thrones sibling incest, pretending that Theon is not her brother and letting him feel her up while she enjoys it. She's also a more androgynous character, in the same vein as Arya, though perhaps not quite as masculine as Brienne, who rejects the traditional gender roles the people of Westeros are typically forced into.

She was the only offspring of Lord Balon Greyjoy to survive Robert's Rebellion, besides Theon, who was taken as a hostage and ward of Eddard Stark when he was a child. But Yara got to remain in The Iron Islands with her father, where he groomed her to one day take his place. This has a lot to do with why she is able to embody more typically masculine attitudes about her place in the world.

The clip of Yara kissing the woman in the tavern actually made it into the Game of Thrones Season 6 trailer, and it had fans wondering if she had secretly been a lesbian all along. One of those fans managed to reach George R.R. Martin to ask him directly, and he had this to say: "I have a number of lesbian and bisexual women in the novels (and a couple who experiment), but Asha is not one of them. Unless I am forgetting something..."

So it seems as though this is another case of showrunners David Benioff and D.B. Weiss taking some artistic license and making Yara a queerer character than she is strictly described to be in the books. But with so few women in men's roles on the show in general, adding one queer, powerful, androgynous female character to the mix isn't something I'm complaining about. Why shouldn't Yara get to have her pre-battle sex boost along with the men?