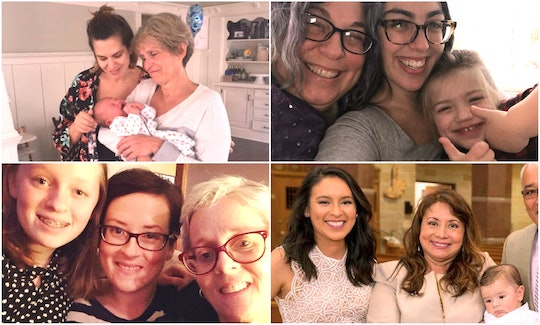 Is Your Mom In The Birth Plan? These Women Had 4 Different Answers

A lot has changed about giving birth over the years, especially when it comes to who is in the delivery room along with the expecting mother. Prior to the 20th century, midwives were overwhelmingly present at birth, along with female relatives. It wasn't until the 1960s that the soon-to-be dads were allowed in the delivery room to hold their partner's hand during contractions, instead of out in the waiting room with cigars, whisky, and copies of Life magazine. Today, expectant fathers are presumed to be a part of the event (my husband assisted me during pushing, along with the labor nurse). But when it comes to the pregnant woman’s own mother, that piece of the support puzzle is often absent.

Some women choose to have their moms by their side in the delivery room; others ask them to stay outside in the waiting room during the big event. And others request that their mothers come visit later, once baby is home from the hospital.

The length of postpartum hospital stays have something to do with this change as well. In 1970, the average length of hospital stays was four days; today, it’s as little as 24 hours. And, given that recovering women are encouraged to room-in with their babies (and learn all the basics of newborn care as they go), that often leaves little time for visiting with family at the site of the actual birth.

We don't talk much about our "support system," but our mothers certainly used to be a part of that postpartum infrastructure. Today, they're more likely to be stocking you up with a carload of Costco toilet paper and offering to hold the baby while you pee in those early weeks than there with you in the delivery room. So how do women factor their mothers into their birth plan? We spoke with four adult mother-daughter pairs of women about their birth stories.

Jamie is a writer, and her mother is a novelist. They both live in Connecticut.

Jamie: I'm usually an attention seeker. I like being the center of attention, and getting all kinds of attention. But when it came to giving birth, I felt like if I could have been a cat that went under a porch all by itself, chilled out there for a little while, and then came out when she was good and ready, I would have loved that.

I just imagined it would be me and my husband and minimal medical staff. My mom asked me what I wanted to do, and I told her: "Honestly, I don't want anyone in the waiting room, because I'll get performance anxiety. I'll tell you when I go into labor. And then after I give birth, I'll call you. But I don't want anyone in the room but Josh.” And my mom said, "Oh, thank God. I didn't want to.”

[My mom and I] communicate well. We have a good relationship. We're really close. But there was something about birth. I thought of it as private and insular, I guess. I just didn't see birthing in front of an audience.

Terri: When Jamie was saying, "I really don't want anybody there,” part of me was like, "Well, I want to be there." And then the other part of me felt, "That's just fine.” When she went into labor, they just called us and said, "It's started." And then we just waited until we got the phone call that said, "It's all done.” At the time, she was in New York, and we were in Connecticut. So going back and forth, it just would have been kind of a pain in the ass.

Stephanie and her mother Lydia both live in New York. Stephanie works as a lawyer, and Lydia is a paralegal.

Stephanie: My mom and I are best friends. We do everything together, so before I got pregnant I just had it in my head that she would be there in the hospital room. However, towards the end of my pregnancy, I started watching birth videos so that I could brace myself for what was about to happen to my body. When I watched a couple of those, I started to have second thoughts about who was going to be there.

I've never even been hospitalized — not even for like a broken bone — in my entire life, and I didn't know how my demeanor was going to be during childbirth. If I started to look distressed or anything, I was nervous about how my mom might react. I decided that the best-case scenario would be to have her basically on standby. Have her be waiting in the waiting room, and me, my husband, and the doctors in the actual birthing room.

And that’s what ultimately happened, but my husband had a really hard time watching me go through that pain unmedicated. I was making these crazy noises, and screaming, and crying. The whole time I'm thinking, "Oh my god. Thank god my mom is not here watching me do this, because she would be so upset."

Lydia: I got a text from [Stephanie's husband] Kyle the morning after her labor started. So I get there, and they had just given her an epidural, and so she's calm at this point. I did not see her with the pain that she just described. In a way, [Stephanie is] right that she didn't want me to see her in the painful stage, but if I had been there, I would have understood. I went through it with two of my children, and I know how painful childbirth is.

Then all of a sudden, the doctor comes and says, "OK. She's going to be pushing. You guys have to leave. Wait downstairs.” Everybody's waiting downstairs, then all of a sudden, we get this message: "He's born. He's beautiful." It was the most amazing day of my life. Either way I would have been happy with whatever. We were there ready to take over, whatever we needed to be.

Kristin and her mother Judy are best friends — despite living cross-country. Kristin lives in L.A., while Judy resides in New Jersey.

Kristin: My mom and I are extremely close. We share everything, and talk an obscene amount each day. I wanted her to be there for as long as possible until I started to feel uncomfortable, but she wasn’t in the room with me when my baby was born. The main reason was that my husband tends to be second fiddle to some big moments, because of how close my mom and I are. And I was worried that I would either not have as strong of a memory of my husband during that moment, and I would just default to my mom.

I talked it over with her, and with my husband, and my mom was more than comfortable with whether we wanted. I was a little paranoid; I didn't want her to feel like she wasn't included. But a lot of my friends' moms flew out two weeks after the baby was born. My mom was there up until it was time to start pushing.

Judy: It made me feel good that Kristin made me a part of it. She didn’t ask me to come to the hospital later on or anything like that. I stayed with them the whole time, except for taking a walk here and there, but she was just happy to have me — and I was happy to be there. I was there in the room with her right until it was really time for her to start pushing, and then Kristin asked me if I would leave — and I was fine with that.

I was kind of nervous sitting out there because it seemed like forever. But then my son-in-law came out and asked if I wanted to meet my grandchild — and that was amazing. It made me cry, to walk in there and see Kristen laying there with the baby. If a parent can be there with their child like that, I think that's amazing.

Melanie is a school librarian who lives in Massachusetts; her mom, Debbie, is a retired medical biller who now takes care of seven of her grandchildren.

Melanie: I knew I wanted my mom in the delivery room with me from the beginning; I was 19 when I got pregnant with [my daughter] Kali, and I was a scared kid. I had no idea what I was doing, and even though I had [my husband] Troy there, he was also a scared kid who didn't know what he was doing. So, I definitely needed my mom.

I ended up going into labor at midnight on New Year's Eve — my water broke, and then my mom ended up coming to the hospital later on, once the sun rose. She was with us the whole time that I labored, and she was there seeing Kali be born.

Debbie: I definitely wanted to be there and see Kali be born. Melanie chose to have an unmedicated childbirth; she did not have an epidural or anything, and I found it very difficult to watch her deal with the pain and see her express the discomfort that she was in. But Kali came out quickly, and the actual birth — it was wonderful.