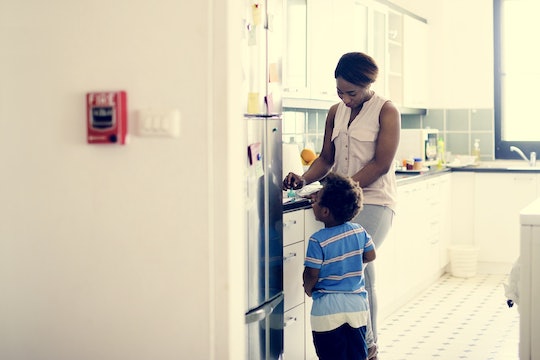 As a first-time mom there were countless times that I spent my nights researching potential risks, activities, places or situations that could bring harm to my daughter. An outbreak of hand-foot-mouth disease meant we stayed away from the splash pad. The measles outbreak at Disneyland kept us away from the Happiest Place on Earth until things calmed down. Because I was advised early on in my pregnancy about the signs and symptoms of postpartum depression (PPD), I knew that what I was feeling was not PPD. However, my anxiety felt like it was at an all-time high after birth. I would plan our entire day around risky situations. Was my anxiety as a new mom normal? Or was this uncommon? When asked if having a child could cause a woman to develop anxiety, experts on this topic overwhelmingly agreed that yes, women can experience several common forms of anxiety during and after baby.

Women may feel anxious, fearful, and overwhelmed at not only the responsibility of taking care of a child, but the pressure to bounce back and pretend like everything’s OK.

"While we understand that anxiety can be a normal and adaptive response to the unpredictable and unprecedented demands and responsibility, when women are overwhelmed, emotionally compromised, sleep-deprived, and transitioning to motherhood, the anxiety can combust," says Karen Kleiman, a licensed clinical social worker, and founder and executive director of The Postpartum StressCenter.

Dr. Jonathan Abramowitz, professor of psychology at the University of North Carolina at Chapel Hill, and director of the university’s OCD and anxiety program, tells Romper that we hear a lot about PPD but not clinical postpartum anxiety, which occasionally includes Obsessive Compulsive Disorder (OCD), panic attacks and generalized anxiety disorder.

“We know that people who have a history of problems with anxiety are at increased risk to have that exacerbated when they get pregnant,” he says. The illness presents itself when the mom is pregnant and in the first three to six months after birth.

“The first thing readers should understand is that anxiety is a normal and universal experience. It is an adaptive response to the perception of threat. Anxiety is not bad for you. It’s especially common for new parents to have some degree of anxiety or worry,” he adds, “but when that anxiety gets to a level that the person is not taking care of themselves that’s an indication it is getting in the way with the partner or caring for the child.”

Kleiman explains while anxiety is anticipated after having a baby, it can also be crippling. Varying degrees of anxiety that are expected during the perinatal period range from hypervigilance, difficulty sleeping, to irritability, and obsessive thinking. These symptoms may manifest in physical symptoms, as well, including loss of appetite, headaches, dizziness, and teeth clenching/grinding.

Kleiman tells Romper one of the most common and unsettling manifestations of anxiety during the perinatal period is the emergence of negative, intrusive thoughts of harm coming to the baby — which can occur for both moms and dads. These unwanted thoughts, images, and impulses are collectively referred to as Scary Thoughts.

While PPD is very well known, awareness of postpartum anxiety has yet to catch up.

Among perinatal mood disorders, anxiety is more prevalent than depression, says Ann Smith, a certified nurse midwife and nurse practitioner, and president of Postpartum Support International (PSI), tells Romper that, in her professional opinion, the most common presenting symptom of Perinatal Mood and Anxiety Disorders (PMADs) is anxiety, not depression. The illness can start in pregnancy (as in 30 percent of cases) but is most often postpartum. It can occur anytime in the first 12 months after delivery and, without treatment, can last a long time.

While PPD is very well known, awareness of postpartum anxiety has yet to catch up. But steps are being made to help bring the focus to these disorders.

"New research reveals that anxiety-related disorders impact over 15 percent of pregnant and postpartum women, which may be the same or slightly more common than depression during the perinatal period," Kleiman says, citing research reported in the Journal of Affective Disorders. "And since postpartum depression is most often associated with significant anxiety symptoms our attention and research is shifting to gain more information about anxiety disorders during this transitional time in parents’ lives."

To help provide postpartum women a safe place to express these thoughts, Kleinman and her team launched its #speakthesecret campaign.

"Women continue to be silenced by the taboo against expressing negative feelings and thoughts about being a mother. We have discovered, however, that when women find a safe place/person to disclose their unwanted and intrusive thoughts, this decreases their anxiety, thus, helping them feel better," she says.

KC, a mom with a 6-year-old daughter who asked that her last name not be used, was initially diagnosed with anxiety and depression eight years ago.

“When I had a panic attack everything around me just stopped and I couldn't think straight. It would take me awhile to calm down. I cried all the time and sometimes felt dizzy. I had chest pains almost every day and had a hard time sleeping,” she recalls of her situation before seeking treatment. She began to feel better after seeing a therapist and being placed on medication.

My daughter was doing great but the impact her birth experience had on me was overwhelming.

When KC fell pregnant, she stopped taking her medication, although she worried her symptoms would return. To her surprise, KC did not experience any depression or anxiety throughout her pregnancy. It was only when her daughter was born prematurely that the symptoms came back in full force. She was constantly worried about daughter when she was in the NICU, and thought the worst was going to happen.

“I went back to my therapist after I gave birth — probably about a year or so later. My daughter was doing great but the impact her birth experience had on me was overwhelming. I wanted to try taking medication again,” she recalls.

For others, the stigma of mental health issues or a reluctance to discuss these experiences with health care professionals can impede treatment. Abramowitz explains that some women have unwanted thoughts, such as visions of shaking the baby, but will not tell her doctor. Also, it can be hard to differentiate mild from severe symptoms, and make a call on when it is time to seek help.

Lauren N., an editorial director and strength coach for yogabycandace and author of TheGingerJourneys.com, first experienced clinical anxiety 15 years ago, and was doing well in the years following until she delivered her first son. Her anxiety started almost immediately, even before leaving the hospital.

“I couldn't sleep because I started to worry if I would be able to breastfeed, what he would need if he cried and the nurses weren't around to help and if I was doing things 'right' as a mother,” Lauren tells Romper.

She constantly worried about every single thing, and eventually feared going out in public, concerned that her son, who suffered from colic, would be inconsolable when out in public and that other people would judge her poorly as a mother. Her postpartum period was suffocated by anxiety, nervousness, sadness, negative self-talk, emptiness, depression, feelings of failure, and feeling completely overwhelmed.

Several concerns held her back from seeking treatment, such as disclosing to her place of work that she was taking medication and/or seeking therapist support. She did not want to take medication while breastfeeding, and felt overwhelmed researching therapists. She sought to “just push through it,” the ways other moms do.

Everything came to a head after she had a panic attack. She contacted a therapist who talked her through the attack then scheduled an appointment for the following Monday. “Luckily, through weekly therapy appointments and minimal medication, I've never felt better,” she says.

"Parents are often comforted to hear that [scary thought] are anxiety-driven and not an indication that there is anything seriously wrong," says Kleiman "Acceptance of this high level of anxiety, along with coping strategies, can bring significant relief. If distress persists, scary thoughts respond well to treatment (medication, and/or psychotherapy)."

I felt like I was failing and that I was a bad person for not being blissfully happy.

Desiree Vargas Wrigley CEO and founder of Pearachute, a mother of three, immediately felt panicked and overwhelmed after delivering her first baby. At home, those feelings increased as she felt self-doubt, panic, and anxiety. Eventually it turned into mania and hysterical crying on the bathroom floor. Wrigley says, “Finally, it got very dark and I wondered if my baby might actually be better off without me.”

When Wrigley sought help from a doctor at eight weeks postpartum, she downplayed her symptoms. After the appointment, she left a sobbing voicemail for the nurse asking for help and immediately returned to the doctor’s office to admit her true feelings.

“I was so ashamed and embarrassed,” she says. "I felt like I was failing and that I was a bad person for not being blissfully happy.”

The important thing to know is that all symptoms of postpartum mental health problems are treatable. And not all cases require medication. For instance, those with mild cases may find relief with the help of a trained therapist and support group where available. For moms with moderate to severe symptoms a combination of medication and therapy is usually the quickest route to recovery.

For moms in the midst of anxiety, Smith wants to offer the reassurance that you are not alone, and you are not to blame.

“What we have to understand is this is an illness, not a weakness, it’s not a deficiently, you are not a bad mom,” she says.

“My advice is to trust yourself and only you know what you're going through and feeling. But also understand you're not alone and there are people who care about you,” says KC. "Seeking help is a positive thing and not bad.”

“If you are feeling too overwhelmed, ask a close friend and confidant to help you find a resource," suggests Lauren. "I had a few friends who if I had only asked, would have no doubt have helped me.”

If you are experiencing prenatal or postnatal depression, you can call 800-944-4773 to reach a counselor at Postpartum International. If you are having suicidal thoughts, call 1-800-273-8255 to reach the National Suicide Prevention Hotline 24 hours a day.

More Like This
Why Does My Baby Cough While Breastfeeding? Experts Explain
30 Marvelous Baby Boy Names That Start With “M”
In Search Of New York City's Most Luxurious Birth Experience
53 Rainbow Baby Names Filled With Hope