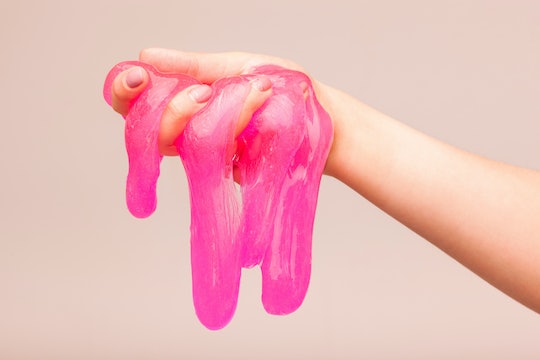 Slime is yet another one of those old crazes from the 90s making a comeback in today's market for kids. It's definitely a nostalgic item for adults, while kids get to have some sticky, but not too messy, fun. But, as slime products continue to grow in popularity, a new report has warned that some brands of toy slime may not be safe and here's everything parents need to know.

Aside from those who've embarked on their own journeys to create homemade slime, many people don't know what slime is really made of. The main appeal of slime is its gelatinous texture, which also allows the product to be manipulated into different shapes. According to the U.K.-based consumer group Which?, that texture is achieved using borax, a compound of boron.

Boron is a naturally occurring element, according to the Center for Disease Control. As noted by Which?, both borax and other derivatives of boron, like boric acid, are found in a number of products around the home, such as pesticides, face creams, and household cleaners. Although boron is naturally occuring, that doesn't mean it's great for consumption.

Which? conducted tests on children's toy slime products to determine the amounts of boron contained within each. The European Union's safety limit for boron is 300mg/kg, as reported by RT. Although the products are primarily from the United Kingdom, some were available for sale online at Amazon and eight out of the 11 products failed Which's safety test.

Romper's request for comment from each company and manufacturer included in Which?'s report was not immediately returned.

According to the CDC, adult exposure to large amounts of boron (about 30 grams of boric acid) over short periods of time can affect the stomach, intestines, liver, kidney, brain, and can eventually lead to death. "We do not know whether children differ in their susceptibility to the effects of boron," according to the CDC, but the organization noted that it's likely that children would show the same effects as adults.

Although there is no research done on whether boron causes birth defects in people, the CDC reported that low birth weights, birth defects, and developmental delays have been recorded in newborn animals whose mothers were orally exposed to high doses of boron in the form of boric acid.

When approached by Which?, Amazon reportedly said, "All Marketplace sellers must follow our selling guidelines and those who don’t will be subject to action, including potential removal of their account. The products in question are no longer available."

Which? also noted the difficulty of knowing which slime is safe, as many have minimal labeling.

Although Which? conducted its testing on U.K. products, it's important for parents in other areas to be aware of the risk of high boron levels in slime. If you're unable to find the levels listed on slime packaging or online, it's probably best to simply toss it.

But none of this means kids can't play with slime ever again! There are simple, borax free slime recipes that can be tried at home. And for most, all you need is cornstarch.