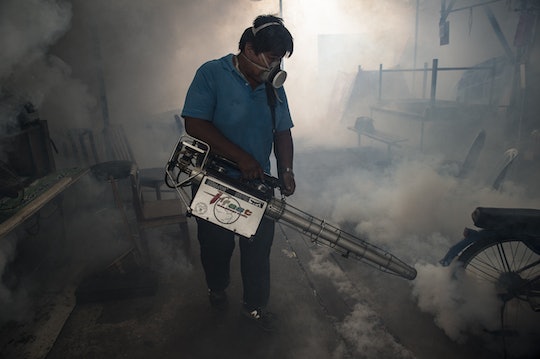 Is Zika Dangerous In Your Second Trimester? It's A Definite Concern

Despite cooling temperatures in some areas around the States, the Zika virus continues to be a concern for many. For pregnant women and couples looking to start a family, Zika's known links to severe birth defects have made many people concerned about mosquito bites – particularly in areas where the virus is prevalent. But is Zika dangerous in your second trimester? Studies have suggested that an infection with the Zika virus can have negative effects for unborn babies at all stages of pregnancy.

Back in March, NBC News cited a study in the New England Journal of Medicine, which provided information from lab reports revealing that a Zika virus infection during pregnancy is "associated with grave outcomes."

We saw problems with the fetus or the pregnancy at eight weeks, 22 weeks, 25 weeks, and we saw problems at 35 weeks... Even if the fetus isn't affected the virus appears to damage the placenta, which can lead to fetal death.

This is certainly concerning for pregnant women – especially considering, as an article in The Atlantic noted, other viruses that attack the fetus like, rubella, are primarily and particularly dangerous in a pregnant women's first trimester.

The Zika virus, which can also be sexually transmitted, swept through the Americas in early 2015. Certain areas throughout the United States have been reported to have travel-associated cases of the virus, and areas in Florida, like Miami and the Tampa Bay area, have had reports of locally acquired mosquito-borne transmissions of the Zika virus.

In April, the Centers for Disease Control & Prevention concluded that Zika caused microcephaly, and other severe birth defects:

Scientists at the Centers for Disease Control and Prevention (CDC) have concluded, after careful review of existing evidence, that Zika virus is a cause of microcephaly and other severe fetal brain defects.

The CDC defines microcephaly as a birth defect in which a baby's head is smaller than expected. In some cases, microcephaly occurs because a baby's brain didn't develop properly during pregnancy, the CDC noted.

It's understandable why pregnant women or women expecting to be pregnant would be concerned about contracting Zika. The CDC lists best Zika virus prevention tips on its website, so whatever stage of your pregnancy you may find yourself, make the extra effort to read up, educate yourself, and stay safe.