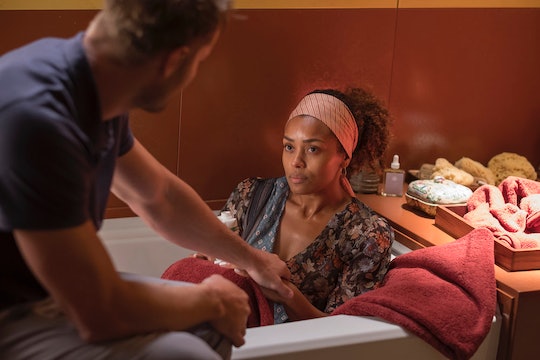 Some 'This Is Us' Fans Think Zoe Might Be Pregnant

In "Sometimes," Kevin and his new girlfriend Zoe took a trip to Vietnam to delve further into Jack's past and his time as a soldier. However, before they could get to the bottom of Kevin's family history, they decided to take in the local culture. Zoe ended up taste testing a healthy serving of bat meat, then spent the rest of the episode feeling very ill. Naturally, some fans began to wonder: is Zoe pregnant on This Is Us?

A woman puking on television has become shorthand. If a character vomits, expresses exhaustion, or develops unfamiliar cravings, then she usually ends up finding out she's pregnant. It makes total sense that viewers would jump to that conclusion. Kevin and Zoe gave no indication that they were ready for or planning to have a kid any time soon, but they're sexually active adults in a committed relationship; these things happen. It would be possible for Zoe to be pregnant, even if it would complicate things quite a lot.

However, there is also a very simple explanation for Zoe's illness: she ate something unusual and she got food poisoning. The cause and effect are pretty obvious. Another possibility is that her illness was linked to her emotions; in the episode, she told Kevin that she had been sexually abused by her father as a child, and it was obviously something that had been weighing on her mind. Stress can manifest in physical symptoms like nausea or vomiting. A combination of bad bat and anxiety could be the reason Zoe got sick.

There's no sign that Zoe is pregnant right now, but that doesn't mean the reveal couldn't happen sometime in the next few episodes. Pregnancy and parenthood have been major themes of the entire show, but are especially relevant in Season 3. After suffering a miscarriage, Kate had been trying to conceive a child via in vitro fertilization (IVF), despite the difficulties. In addition to the health risks, her attempt to get pregnant caused drama in the family: she stated that she was the only sibling who could carry on a piece of Jack, because Randall was adopted and Kevin certainly wouldn't have kids.

At the time, the show focused on the argument she had with Randall after that. He was hurt that she thought he wasn't also carrying on Jack's legacy, and she didn't think he understood what she was going through because his wife was able to have children so easily. But it could have also been a hint about what was to come with Kevin. It would be on brand for this show if Kevin ended up having a kid after Kate dismissed the idea of him being a dad so totally. And that was something fans picked up on.

On Reddit, several viewers speculated that Zoe was indeed pregnant, but that it might result in some messier than usual Pearson family dynamics. Kate and Toby were finally expecting, but users ripleysmommy and ouatfan30 both theorized that she might miscarry again. If Zoe was pregnant but uninterested in having a child, she and Kevin could choose to let Toby and Kate adopt their baby. There are more than a few holes in that theory, though. Would Kevin really hand over his kid to his sister? How do we know Zoe doesn't want to be a mom? And Kate has already been through a lot, so it's hard to believe the show would put her through yet another miscarriage.

While it is technically possible that Zoe could be pregnant, sometimes the most obvious culprit is the correct one. She wouldn't be the first person to get food poisoning in a foreign country, after all.