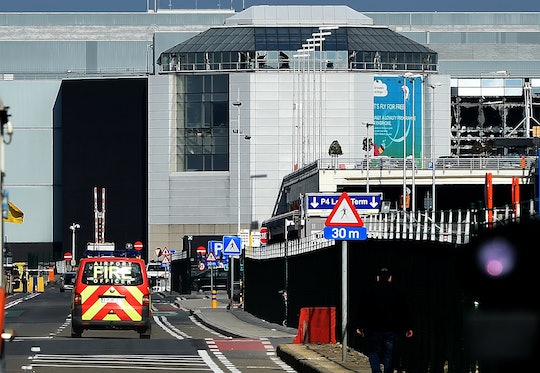 Just hours after three bombs exploded in Zaventem airport and the Maelbeek metro station, ISIS claimed responsibility for the Brussels attacks. According to The New York Times, the news agency of the Islamic State issued a statement via the group’s official Telegram channel, and the news quickly spread through other ISIS channels and on Twitter.

Shortly after the first explosion in Zaventem airport, Islamic State supporters created the Twitter hashtag "Brussels is on fire," according to The Jerusalem Post — which was apparently inspired by a similar hashtag created after the November 13 Paris attacks, "Paris is on fire."

Shortly after the attacks, Belgian Prime Minister Charles Michel told reporters he — and, presumably, his country — feared a possible strike:

We were fearing terrorist attacks, and that has now happened.

But fear is one thing. Seeing it, and living it, is another.

The attack began just after 8 a.m local time, when two bombs ripped through Zaventem airport. (It has since been reported a third, unexploded device — a suicide vest — was also found at the airport though, according to BBC News, a controlled detonation of a "suspect package" was performed Tuesday afternoon.) Less than an hour later, a third explosion rocked the middle car of a three-car subway train at the Maelbeek metro station.

The trains driver immediately evacuated the first and last carriages, according to BBC News.

The attacks in Brussels have claimed 34 lives and injured more than 170 people, according to CNN. However, Belgian federal Prosecutor Frederic Van Leeuw believes the death toll may rise, as it is far too soon to know exactly how many people died in the bombings.