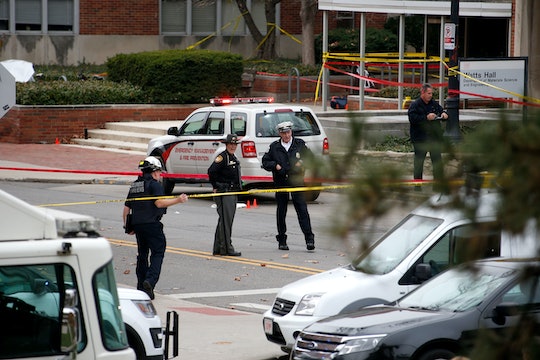 On Monday, Ohio State University student Abdul Razak Ali Artan drove his car onto a sidewalk and began attacking pedestrians with a pedestrian knife in a harrowing — and, so far, unexplained — attack. On Tuesday, ISIS claimed responsibility for the Ohio State attack through its news agency, AMAQ, saying Artan was a "soldier" of ISIS, but authorities are still investigating the case and have yet to release a motive for the crime.

According to ABC News, the language used by ISIS to claim the Ohio State attack is similar to the kind it has used in the past to claim independent attacks not linked to the terrorist organization. A post reportedly published on Artan's Facebook account before the attack didn't mention ISIS, either, and instead read:

If you want us Muslims to stop carrying lone wolf attacks, then make peace. ... I can’t take it anymore. America! Stop interfering with other countries, especially the Muslim Ummah. We are not weak. We are not weak, remember that.

It's important to note, however, that the post has not yet been publicly confirmed by law enforcement. The Federal Bureau of Investigation is still investigating the motives behind Artan's attack, according to Haaretz, and a law enforcement official reportedly told the newspaper that Artan was not known to the FBI before his attack on Monday.

The fact that ISIS has claimed the attack doesn't mean that it was actually involved in it in any way, however. But by linking themselves to attacks perpetrated by suspects from Muslim backgrounds, ISIS deepens the divide between the West and Muslims, perpetuating an "us vs. them" ideology in an attempt to radicalize more Muslims. It also creates the perception among the public that ISIS is growing in vast numbers — a fairly strategic move when it comes to appearing powerful. As J.M. Berger, co-author of ISIS: The State of Terror, told The Washington Post in July, "If they can credibly insert themselves into the narrative around an attack, they win, essentially."

Until law enforcement finishes its investigation into the Ohio State attack, the public won't know for certain what Artan's motives were. In the meantime, 11 people injured in the attack remain hospitalized, and on Monday afternoon, Ohio State President Dr. Michael V. Drake asked the campus community to remain united.

"We all know when things like this happen that there's a tendency sometimes for people to put people together and create other kinds of theories," he said during a press conference, according to CNN. "What we want to do is really unify together and support each other; do our best to support those who were injured in their recovery, and then allow the investigation to take place."

With an investigation ongoing, it could be a while before further details emerge — but in the meantime, it seems wise to take claims of responsibility with a grain of salt.