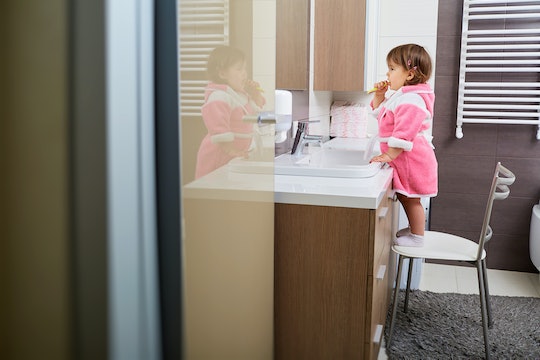 It Takes More Than Brushing To Protect Your Child’s Teeth, According To New Study

Heads up, parents — everything you know about being proactive about your kids dental health may be a lie. Well, not everything, and that's a rather dramatic take on things, but some new information about dental care may come as a surprise to some moms and dads. Researchers recently discovered that children who snacked all day — instead of just eating meals — were far more likely to have dental decay, and that snacking habits were strongly associated with decay, according to a new study from the University's of Edinburgh and Glasgow. The study suggested that brushing might not be enough to protect your child's teeth, which might have parents a little worried.

But the results of this study don't mean you should abandon teaching your little ones important teeth-cleaning habits, so if you've got a fun song or nursery rhyme that you've taught your kids to get them to brush their teeth, no worries. It's probably still an important tool to have in your parenting arsenal.

In this study, social scientists from Edinburgh and Glasgow used "statistical models and survey data" to predict dental decay by age 5 in kids, in a study of almost 4,000 pre-school children, according to the BBC. The study showed that counting on tooth brushing alone to keep dental decay at bay may not be enough, and that snacking habits as well as parental socioeconomic factors may impact dental decay and the health of children's teeth.

The study found that snacking was actually the factor most strongly associated with decay, the BBC reported. Children who snacked all day without eating meals apparently had twice the chance of decay when compared to those who did not snack at all. That's pretty significant.

But just because snacking seemed to be a more important factor in this study when it came to dental decay, the results reportedly did show an association between "lower frequencies of tooth brushing" at age 2 and higher chances of dental decay by age 5, according to the BBC. The study, published in the Journal of Public Health, found that "among children eating sweets or chocolate more frequently" — as in, once a day or more — toothbrushing more frequently reduced the chance of decay in the end. Basically, if kids are going to snack on sweets, it's extra important for them to brush their teeth more often.

This is a topic that is likely of great importance to doctors and dentists in the United Kingdom right now, because almost 43,000 children and teenagers in England and Wales had operations to remove teeth last year, according to the National Health Service.

Children in homes from more disadvantaged backgrounds, and non-white ethnic groups were far more likely to experience dental decay. Compared to mothers in managerial and professional occupations, those who had never worked had children with a much higher chance of decay (OR = 3.47). Children of mothers from non-white ethnic backgrounds were far more likely to experience decay (OR = 2.61).

Again, no one is saying don't teach kids to brush their teeth. It's still important for children to pick up the habit, and to commit to oral hygiene practices. This study is just saying that it definitely takes more than brushing to protect your child's teeth, and that other factors are at play — factors that parents can sometimes control, along with others that might be out of their hands.

It can be hard to teach your kids to look after their teeth, but it's still important. So maybe keep that silly song about brushing teeth in your back pocket, just in case.