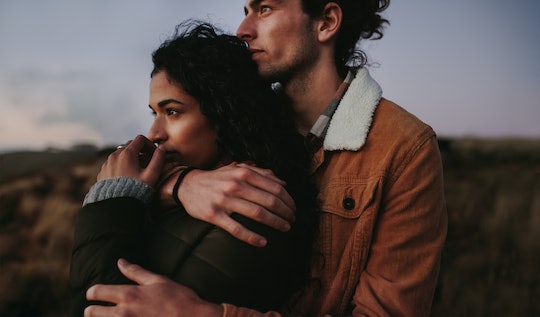 Most breakups are difficult, there's just no getting around it. A person with whom you spent a ton of time, shared a connection, and invested in building a life with just isn't part of it all anymore and there can be a lot of emotions that come along with that. And though each relationship and breakup is different, it would be really nice to know if there was a set amount of time it'd take you to move on. As it turns out, it wasn't truly love if it doesn't take this amount of time to get over someone.

That's right, researchers have actually looked into this very question to try to learn more about how long it really actually, truly does take to get over a breakup. Different kinds of relationships can take different amounts of time to get over, as you're likely not surprised to hear. A 2007 study published in The Journal of Positive Psychology found that it typically takes about three months for you to get over a breakup, which they determined when looking at the breakup recovery time for over 150 undergraduate students. And in an interview with Glamour, Dr. Ramani Durvasula, PhD, the author of Should I Stay Or Should I Go?, said that many people might start to feel more normal after about six weeks or so, but that it can take up to three months to get over a breakup. But not all researchers actually agree that that's the right number.

Bustle reported that a survey conducted by OnePoll and Yelp Eat24 concluded that each breakup takes about six months to get over and that people experience approximately three big breakups over the course of their lives, which means they'll spend about a year and a half in total getting over people that they loved. These are averages and estimates, however, and it's important to keep that in mind.

Still another group of researchers found that if you were married before your relationship ended, it'll take far longer to get over the loss that you'll likely feel when the marriage ends. British outlet The Telegraph reported that the dating site Fifties.com conducted a survey that found that divorce takes about 18 months of recovery time (which is the same amount of time as the OnePoll survey concluded that people spend getting over big breakups over the course of their lives).

Regardless of how long it takes you to get over your former partner, it's clear that, if you truly loved them, it'll take longer than you likely wish that it would. Breakups can be extremely painful, resulting in time spent isolated from others, difficulty sleeping or doing some of the activities that you may have formerly done, and more. They can be big life transitions, and so can affect you much the same way that other big life transitions might.

Additionally, people are different and people respond to challenges and difficulties in different ways. So though the average for divorces once they're finalized might be 18 months, it might take you much longer or a bit less in order to come to terms with how you feel about things and how ready you might be to move on. The same is true for serious relationships that take three or six months to get over. Ultimately, it's difficult to come up with an exact number because your individual circumstances can vary wildly from what others might be experiencing. But if you were in love with your partner, chances are it'll take at least a few months to get over the loss of the relationship you once had.