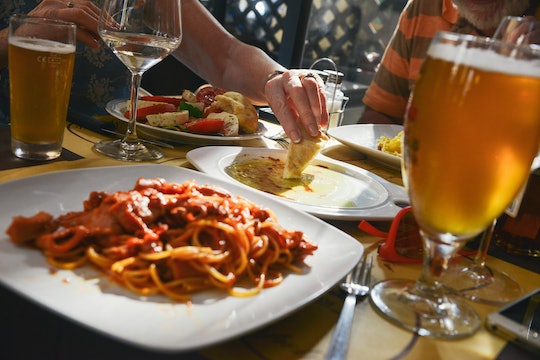 Anyone who's eaten in a restaurant on a busy Sunday knows the scenario: There's always one group of kids tearing through the establishment, screaming with excitement, as their parents simply try to get through a meal. It's the culinary equivalent of having a kid kick the back of your airplane seat repeatedly, and the kind of scene that can elicit all sorts of reactions from the public. One wine bar in Italy, however, is taking matters into its own hands and rewarding the parents of well-behaved children with a 5 percent discount. Unsurprisingly, the Italian restaurant's "polite children" discount has evoked all sorts of responses from the public, with some welcoming the initiative and others resentful of the idea of outsiders judging their parenting.

According to The Guardian, Antonio Ferrari, the owner of the wine bar in northern Padua, first came up with the idea when he saw a pleasant group of six adults and five children seated at his restaurant on a Sunday "with much composure." The children were entertained by coloring books, markers, and multiplication tables that the family had brought from home, according to Corriere della Serra. Ferrari had seen a similar discount in a Miami restaurant and wanted to compliment the parents without being too forward.

"We like having children here — as long as they behave," Ferrari told The Local on Tuesday. He explained that children are always welcome, and that the restaurant will often serve them meals that aren't on the menu. However, raucous youngsters can often disturb the peace at the restaurant. Ferrari explained:

When you get parents who are rude, the kids think they can do anything. They might climb on the tables with their shoes on, play in the bathroom and make a mess with the taps, or annoy the other customers.

He stressed the fact that he didn't want parents to think he was judging their parenting, however. "In Italy, we have a problem that people often feel judged, so I didn't want to say anything — even positive — that might be seen as judging someone's children or parenting," he told The Local. "I'd definitely offer the discount again, but I don't want to make it an official promotion or offer because that's not the point."

Ferrari's picture of the discounted receipt received mostly words of praise and congratulations on social media — but some parents were ruffled. "Don't ruin kids freedom," one Twitter user wrote, while another asked, "Who is well-behaved or not?"

This isn't the first restaurant to offer up a discount thank-you to patrons whose behavior they appreciate. One French café prices their coffee differently depending on whether patrons say "hello" and "please" while ordering their drink, while a restaurant in Los Angeles awards a 5 percent discount to those who dine without checking their phones.

As for Ferrari's wine bar, a few locals have even said they'll be passing by to support the restaurant more often now that they know he rewards the parents of well-behaved children — even if their own children can't sit still through a long Italian lunch.