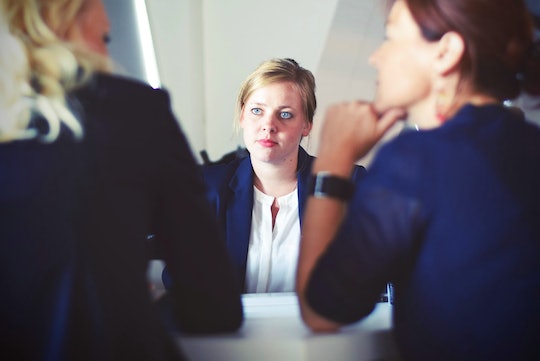 Many women know what it's like to try to concentrate on your work when all you want to do is curl up in the fetal position with a heating pad. Trying to type a simple email becomes 10 times harder when you're in pain. But for women in Italy who experience painful periods, a new law could allow them to stay home from work — without worrying about losing money. Italy may be giving women paid menstrual leave, and here's why it's awesome.

The Italian parliament is considering a law to grant women who experience painful periods paid menstrual leave. If the law passes, companies must give women who experience painful period symptoms three paid days off each month. According to The Washington Post, the bill was introduced to the parliament on March 13, and was drafted by four women (of course).

Some health experts feel that such policies are good for both women and businesses, especially because workplaces lose productivity if an employee is uncomfortable. For more than half of women, period pain has affected their ability to work or even caused them to take a sick day, the BBC reported. Despite how common it is, only 27 percent of women tell their boss that they're in pain.

Some women suffer terribly. I don’t think they should be shy about it, and companies should be accommodating. If women feel supported, it will be a happy and productive workforce.

According to the Italian version of Marie Claire, in order to receive paid leave, women would need their doctors to prove that they have dysmenorrhea, which are menstrual cramps and other painful symptoms in the days before, during, and after a period. Anywhere from 60 to 90 percent of Italian women suffer dysmenorrhea, and it's very likely the number is closer to the higher end, since 84 percent of American women have dysmenorrhea, according to a study from the Journal of Pain Research.

But not everyone is on board with the proposed law, and surprisingly, the most vocal critics have been women. Lorenza Pleuteri wrote in Donna Moderna, an Italian women's magazine, that she feared “employers could become even more oriented to hire men rather than women,” Mic reported. Unfortunately, Pleuteri's concerns are valid, since 61 percent of Italian women are in the workforce, which is well behind the 72 percent of women who work in the United States, according to data from the Organisation for Economic Cooperation and Development.

So what are the chances such laws could come to the United States? Unfortunately, it's not likely at all. The United States has no mandated paid leave laws and only grants 12 weeks of leave with no pay to new parents (Italy, meanwhile, gives new moms five months paid leave). Hell, women even have to pay taxes on feminine-hygiene products in the U.S., so our laws have a looong way to go before they're period- (and women-) friendly enough to allow us to get a day to be grateful you don't have to stand on the subway while you feel like you're being kicked in the lower back. Still, I'm happy for women in Italy, and hope this bill will pass.

But for those of us in the United States, let's keep pushing for better paid sick leave laws, so women all across the country won't have to choose between sitting in the office in pain, or taking a day off without pay.