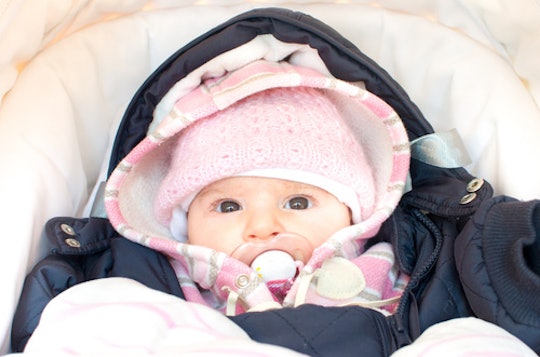 It's January, I Have A Newborn, & It Totally Sucks

My first two babies were summer babies. At the time, I didn't know how great I had it. There's very little prep involved in getting a summer baby ready to go outside: If you want to go somewhere, you stick them in a onesie and out you go. Sure, there's sun and heat to worry about, but those are easy concerns to remedy. Just keep them in the shade and let them eat as much as they want and they'll stay hydrated.

My third baby, however, was born in October. For him, the cold weather hit when he was six weeks old. Having a baby during the wintertime took the already difficult task of leaving the house (first the baby is hungry, then they poop, then you have to pack the diaper bag, and then they are hungry again) and made it even more daunting. I didn't just need to pack diapers, wipes, and an extra outfit. I needed blankets, hats, and more articles of clothing in case he soiled his first outfit.

Since having my baby in the fall, I've learned that having a newborn in the winter is the absolute worst. I realize that this is something of a first-world problem: I've got a cousin in Mongolia whose boogers freeze on the regular, so I try to limit my moaning about the cold. But I'm sorry, having a tiny baby in January is not fun at all.

I am a pretty staunch hater of winter already. I love Christmas and holidays, and I get ridiculously excited at the prospect of wearing my Ugg boots. But once the fun of Christmas is over in January, and I'm tired of hot chocolate and cozy sweaters, I start to realize that winter is the bleakest of the seasons. (And, yes, Seasonal Affective Disorder probably has something to do with that.) Hibernation sounds rad, but when you're a parent, your kids are generally not on board with hibernation because it involves sitting still, being bored, and letting mom rest. And there's nothing a kid hates more than letting mom rest.

Let's talk about baby clothes, specifically socks. Like, why are there so many socks out there for babies that don't stay the f*ck on? There are brands that do stay on, but you have to have some seriously top secret intel to discover them. I have bought so, so, so many socks that I'm surprised the world isn't full of tiny baby socks just rolling in the freezing wind, because I'm sure I've left at least a dozen while running errands in the last few weeks.

The brush of fabric against little kids' cheeks also triggers the rooting reflex, so my kids always got frantic when they wore hoodies, because they were absolutely convinced there was a nipple nearby.

Aside from the issue of keeping their tiny monkey toes warm, there's the issue of hats. Those adorable little beanies that come with all those little matchy-matchy sets? They don't stay on, either. So you buy your kid a hoodie, thinking that a hoodie will solve that problem. But newborns have absolutely no neck. Hoodies on babies look like they are swallowing your child. The brush of fabric against little kids' cheeks also triggers the rooting reflex, so my kids always got frantic when they wore hoodies, because they were absolutely convinced there was a nipple nearby. Sorry, dude, there's no nipple — just Mom making a futile attempt to keep your noggin warm.

Then there's the issue of wind. Newborns hate wind. If there's even a slight breeze, my baby is gasping for air, convinced that he can't breathe. So I feebly try to shove my baby's face against me to block the wind. Here, can't breathe? Allow me to smother you.

Bathing a newborn and trying to keep him warm is also positively fraught with peril. In my years as a mother, I've put way too much thought into how to do this. I arm myself with so many towels that I practically cannot find the baby underneath. And I worry endlessly about the temperature of the bath. I want my kid to be warm, of course, but how awful would I feel if I scalded him? In the summer, I worry less about my baby being a little chilly in the tub. If he seems cold, I will just open the door and let in a bit of the heat.

There's nothing like getting peed on and having that brief moment where the pee is still warm, but you know it's about to be cold.

The other thing about having a newborn in winter that is the worst: one of you is constantly wet. There's nothing like getting peed on and having that brief moment where the pee is still warm, but you know it's about to be cold, and you're soaking in it. And if it's just pee that you're soaking in, consider yourself lucky, because you're just as likely to be covered in poop or spit up. It's not nearly as awful in the summer, because bodily fluids dry so much quicker. Sure, dry spit-up and poop isn't exactly the funnest part of having a baby, but better dry than wet.

The last oft-forgotten joy of winter I would like to bitch about: static electricity. There is nothing like the look of betrayal I get when I shock the sh*t out of my kid. I try to laugh and make a joke about how there's a real spark between us, but my baby clearly isn't ready for that kind of sophisticated humor.

I know winter doesn't last forever. But it certainly feels like it does. Forget mid-December to mid-March: it stays f*cking freezing basically until May. But I know I'll get through it. Heck, I might even enjoy some of it. Because, well, I do have a cute little newborn to snuggle, and that feels pretty effing cozy.