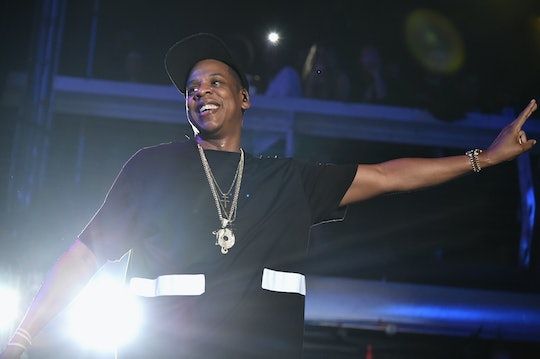 It’s Jay Z’s Birthday, So Let’s Look Back At Some Of The Sweetest Things He’s Said About His Family

Rapper/producer/entrepreneur/Mr. Beyoncé Jay Z turns 46 today, and even though he seems to be a total pro at basically everything, there’s one area where he seems to really shine: being a devoted husband and father. Jay Z and Queen Bey have both shared a little bit over the years on social media and in interviews about their daughter, Blue Ivy, and what life is like as a family. We’ve seen adorable Instagram snaps, and sweet candid shots of Jay Z dancing with Blue Ivy at Tina Knowles’ wedding. We all swooned when he brought Blue Ivy up on stage to congratulate her mom at the MTV awards. And of course, both Bey and Blue have been the topic of some of Jay Z’s best songs. So in honor of his birthday, we thought we’d take a look back at some of Jay’s greatest dad moments — because, really, is there anything sweeter than a man who adores his wife and child? (I don’t think so.)

Jay Z and Beyoncé work hard to keep their family life private, sharing only certain photos and stories with the public, which makes total sense. But every now and then, they’ll open up a bit about each other, and their honesty and devotion gives us serious #relationshipgoals.

Here are some of our fave Jay Z moments, because let’s be honest, they’re adorable: