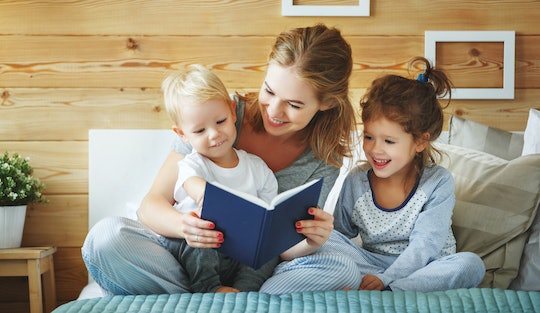 It's Science: Women With More Kids Are "Less Beautiful"

All sorts of factors come into play when couples (or singles) are deciding how many children they'd like to have: money, lifestyle preferences, age and personal desires are only a few. But I'm going to go out on a limb and assume that most women don't sit around and think, "I really want another baby, but I think I'll pass on another kid because it'll make me ugly." (Of course, I could be wrong.) Well, if some new research is to be believed, women should apparently be taking their long-term beauty into consideration when contemplating family size — because of "science." According to a new study, women with more kids are "less" beautiful. [Insert eye roll emoji here.]

This study was recently published online in the American Journal of Anthropology, and quite frankly, its findings are both fascinating and troubling. Newsweek reported that the researchers gathered images of post-menopausal women and divided them up based on how many children they had: Those with one to two children, those with four to five children and those with seven to nine children. (Wait, what about the moms with three children?)

Next, researchers used computers to create a composite face for each category. A team of 571 volunteers — comprised of both men and women — then "judged" these faces based on attractiveness, youthfulness, and how healthy they appeared," according to Newsweek's report.

The results? Time and time again, the group that scored the lowest in all three of these categories were the women with the most children: the seven-to-nine group. And the women with the least children (one to two) consistently scored the highest. Although researchers couldn't make any definitive conclusions about why this was the case, they did suggest that oxidative stress could be the culprit. As Newsweek reported, oxidative stress is a result of an "imbalance between the production of free radicals and the ability of the body to counteract their effects."

As the authors explained in the study's abstract, "Mechanisms behind the observed variation in facial appearance are not known but higher levels of oxidative stress among women with high parity may explain their faster aging and lower attractiveness in older age." According to the study, the authors concluded:

These results suggest that costs of reproduction might affect women's physical appearance.

While this theory is certainly compelling, in my opinion, the study itself seems pretty darn rude. Because women are judged by their appearances enough as it is. And it's getting old. Like really old.

Look, I understand the idea behind the whole oxidative stress theory. And I'm no scientist. However, it seems many other factors could come into play, here. (Like genetics and lifestyle choices, for example.) I mean, it's no secret that having more kids often translates to less sleep and added stress over a longer period of time; most people probably agree these circumstances would take a toll on a person's appearance over the years.

But I'm wondering if the results would be different if researchers had used actual photos of the individual women, instead of an "average" of their faces? I also think it would be interesting to repeat this study — only with men who are active fathers to certain numbers of children — to see if the results are similar. To see if it's more of a physical, child-bearing/delivery/lactation thing, or more of a there's-a-kid-living-in-my-house-and-taking-care-of-it-is-exhausting thing.

One more complaint: Did you see the headline of that Newsweek piece? "Moms: Want to Look Great in Old Age? Stop at Two Children." As CafeMom pointed out, a woman's potential post-menopausal appearance shouldn't keep her from having the family she's always wanted. Plus, I'm willing to bet most moms who already have large families would say the "cost of reproduction" is well worth the love and joy their children have brought to their lives. As a mom of three — and who will therefore be deemed "less beautiful" during my post-menopausal days — I know I'm more than OK with the tradeoff.