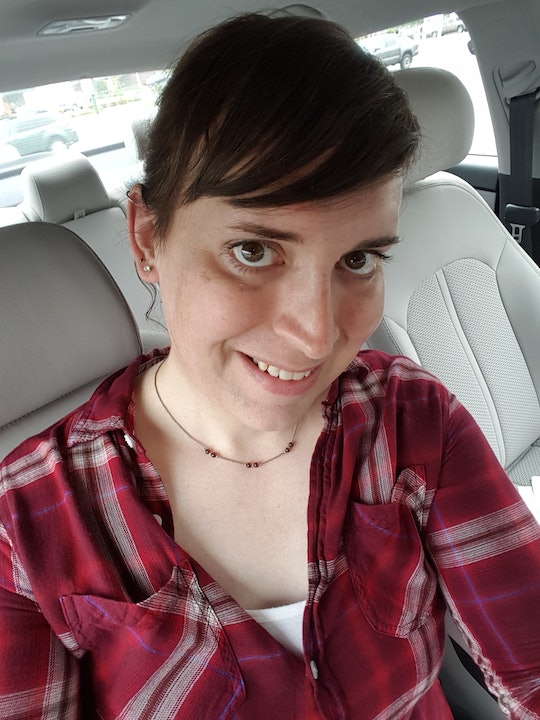 Why It's So Hard For Me To Make Mom Friends

I tugged at the hem of my skirt and flicked the synthetic hair from my wig out of my face. It was my first time picking up my oldest child from school since I'd transitioned, and I was a bundle of nerves. The long glances and second looks I was getting from other other parents on the schoolyard only exacerbated my anxiety.

Since my transition, I had found it difficult to make friends with other parents, and the parents at my kid's school were no exception. To be fair, I had never been particularly close with these parents to begin with. In the past, our interactions had been limited to exchanging niceties at various after-school functions, but since transitioning, I’ve noticed that the niceties have disappeared. Instead, people ignore me entirely. Those who were friendly before suddenly act like we’ve never met.

I already have a lot of friends. I still hang out with former coworkers, I've met many friends online, and I have a great many transgender friends that I’ve met through LGBTQ events and support groups. Before my transition, making friends outside of work or online spaces was always something that I could do, but often chose not to. The emotional toll of gender dysphoria often meant that I simply didn’t have the energy to socialize outside of my everyday routine. When I went to birthday parties and school functions, I couldn’t relax. I couldn’t let the dad mask slip for a second, lest someone realize the truth.

I thought after I transitioned, it would be easier to open up and make parenting friends. But it turns out, making parent friends is complicated for trans women like myself, no matter how outgoing or friendly we are.

Before my transition, my ex-wife and I already had a circle of parenting friends. But our little group was mostly made up of her friends from high school, so it always felt like I was just a plus one in the group. At the time, it worked out well for us, because they were friends our own age who had children of their own. However, once I decided to transition, they supported my ex. In fact, my ex requested that I cut off contact with all of her friends before officially coming out on Facebook as transgender. (I felt this was fair, because they were her friends to begin with.) This left me alone with joint custody of my children, as well as a serious lack of support from other parents. I never felt so utterly alone as a parent as I did immediately after the split with my ex, and I knew my children felt it, too.

My kids are 7 years old and 18 months old. Despite sharing custody with my ex wife, I haven’t managed to arrange any playgroups or playdates with other kids and their parents. When I bring my kids to the park now, we go by ourselves. We definitely have fun together, but I can’t help but think that it would be good for my kids to have their own friends to play with. I get the feeling that my oldest is especially lonely when she stays with me for this reason.

I’m not sure I could live with myself if my daughter lost a friend because of me.

Recently, while visiting my parents at the campground where they live, my oldest met up with a friend she had met last summer while she was at the playground with my mom. After a while, I came out to check on them, and my daughter was having a great time. When I was introduced to my daughter’s friend’s mom, however, awkwardness ensued.

As we were walking back to my parents’ campsite, my mom leaned over and let me know that the girl’s mom worked with my ex. She knew who I was before I transitioned. I didn't know what their political stance on trans people is, or if they judged me for transitioning. But I did wonder what effect this would have on my daughter. Would she still be able to play with her friend? I’m not sure I could live with myself if she lost a friend because of me.

When people I knew before I transitioned talk to me about it, the first question they ask is: "How are your kids taking it?” My youngest is too small to realize how much her life has changed as a result, but my oldest has dealt with a tremendous amount of change between my transition and the divorce. (I do, however, find it funny that people always ask me about how she's handling the transition, and not the divorce itself.)

When another parent criticizes my decision to transition, I want to ask them the same question my therapist asked me before I transitioned: “Are my kids better off with a dead dad, or an alive trans mom?”

Many cisgender people in online parenting spaces (Facebook groups, comment sections) question whether transitioning was right for my children, or that my transition will confuse their own children. The latter question I can at least understand, as everyone has the right to raise their own children as they see fit. But it's frustrating that whenever I seek support as a parent, I end up getting attacked for being transgender. I want to tell these people that I didn’t take the decision to transition lightly and ultimately, the reason why I did so was not in spite of my kids, but because of them.

Before I sought help for my gender dysphoria, I was having daily panic attacks. I was also suicidal. I managed to keep the worst of my depression from my kids, but I knew I couldn’t survive as I was for much longer. So when another parent criticizes my decision to transition, I want to ask them the same question my therapist asked me before I transitioned: “Are my kids better off with a dead dad, or an alive trans mom?”

When I encounter such openly hostile questions from other parents, I know that the spaces that are open to most parents are closed to me. How do I know who is safe to approach for conversation at the playground, or at a PTA meeting? How do I know in advance which parenting circles are trans-inclusive? I know that people (and parents especially) have a tendency to get emotional when the trans topic comes up and to be honest, it's much easier and safer for me to just keep a low profile and not get involved. I can't think of anything more terrifying than approaching the PTA or another parenting group about trans inclusiveness, and I’m not going to risk my children witnessing a transphobic incident simply because I want to socialize and meet other parents.

How do I know who is safe to approach for conversation at the playground, or at a PTA meeting? How do I know in advance which parenting circles are trans-inclusive?

I’ve tried to work around this social dynamic by making friends with other trans people who are also parents. But it’s fairly rare for a trans person my age to have young children. Most of the people I've met through my trans group meetings are either childless and in their late teens and early 20s, or they're well into their 40s and have much older children. There seems to be an age gap between those who transition in their youth and those who do so later in life, and I fall in that gap. The end result is that unless you're in a large metropolitan area, trans parents my age are going to find it tough to find other trans parent friends.

So where does this leave me? Without knowing in advance whether a space meant for parents and their children is supportive of trans parents, I have no choice but to protect the safety of myself and my children. This means I have a lot of alone time with my kids, and few other parents to commiserate with. At the end of the day, it’s my own responsibility as a parent to provide a supportive social environment for raising my kids. I’ll find a way to start making parenting friends somehow, but as a trans parent, it’s an anxiety-filled uphill battle.

More Like This
The 20 Most Romantic Quotes From Friends
Sex & The Single Mom: Grieving Divorce
What To Write In A Valentine’s Day Card
Soul Ties: What Does It Mean & How To Know If You Have One
What Parents Are Talking About — Delivered Straight To Your Inbox