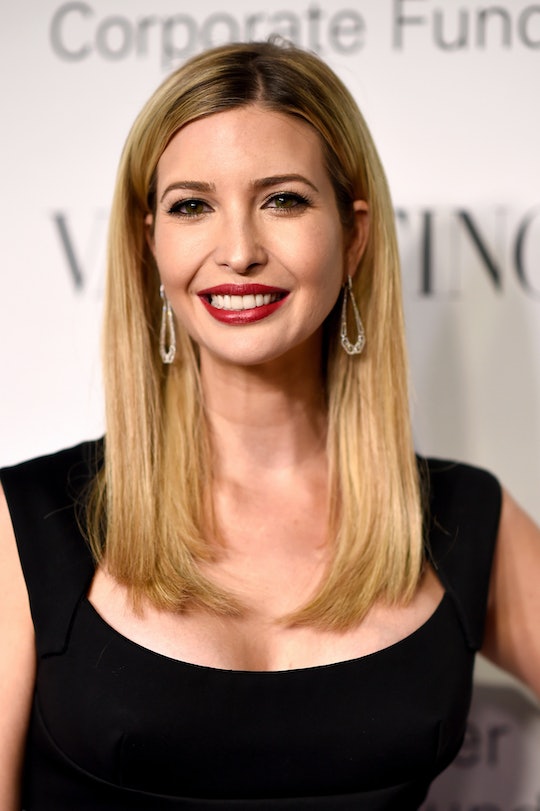 On Monday, Donald wasn't the Trump in the spotlight. Ivanka Trump released the first family photo featuring new baby Theodore James, and it was definitely adorable. The family gathered for the photo during Theodore James' bris, or the event when Jewish male children are circumcised, according to People.

Trump announced her pregnancy in September through an online video, E! News reported; it features her other two kids with husband Jared Kushner, Arabella Rose, who is 4, and Joseph Frederick, who is 3. When Trump asked her kids, "Are you happy?" Arabella Rose nodded her head but Joseph Frederick responded with a firm "No." Trump wrote about her pregnancy on her website, according to E! News:

I couldn't be more thrilled to share the news with you that I am expecting. At the end of the day, it's my family that is at the center of my life—and to be adding another baby to our family is a tremendous blessing...Jared and I are so thankful, and so excited!

The Kushner-Trump family welcomed baby Theodore James into the world on March 27, 2016 at 5:43 p.m., according to Vanity Fair. The announcement appeared on Trump's Twitter account, telling the world that she'd given birth to a boy. She tweeted, "Jared and I feel incredibly blessed to announce the arrival of Theodore James Kushner. Xx Ivanka."

In the weeks following Theodore James' birth, Trump treated followers to several Instagram posts featuring her newborn. The first, of Trump holding her son, is captioned: "Baby Theodore. My heart is full 💙 #grateful."

Trump then posted a photo of her husband and daughter with the new baby the following week, captioning it, "This is love! #bliss."

Despite his earlier proclamation that he wasn't excited about a new sibling, Joseph Frederick seemed to be a bit enchanted by the baby, too:

Trump clearly seems to be savoring this time with her family. In a December feature in Town & Country, Trump talked about prioritizing her kids while still leading a full life:

I abhor this question of 'having it all.' People talk about balance. Balance is an awful measure of things, because it implies a scale that inevitably tips. I like to look through the filter of 'Is the life I'm leading consistent with my priorities?' For me, my family is the ultimate litmus test. Do I feel I'm giving my children what they need? But I don't do everything. I wouldn't be able to do what I do professionally if I did. I don't go to the afternoon classes. I don't take my son to the sports playgroup in the middle of the day. For some people that's a compromise they aren't willing to make, and I respect that.

Trump totally embraces the role of working mom, but her Instagram account is proof that there are few things sweeter than spending time with a new baby.