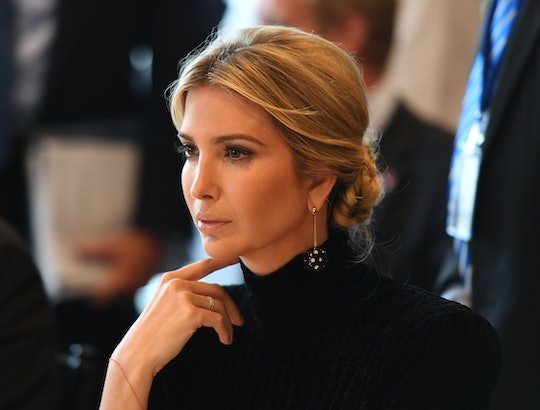 Ivanka Trump Reveals She Had Postpartum Depression, So It Literally Can Happen To Anyone

Look, nobody's perfect. And even though sometimes, people who you expect to be a shining light of goodness turn out to be nothing more than a complicit piece in a cognitive wheel of a democracy-endangering administration, they're still humans. Right? Well regardless of how you feel about her and her father's politics, Ivanka Trump revealed she had postpartum depression, so yeah, it can literally happen to anyone.

While Trump has touted herself as being a feminist and champion for women, many have doubted her true convictions based on the executive orders, and pieces of legislation her father has backed. Truly, with Republicans and Trump working so hard to repeal and replace the Affordable Care Act, and most of their proposed plans gutting services for women, it's been hard to view Trump as the feminist she likes to think of herself as.

But, she's still human, and just like there are no excuses for making fun of Barron Trump and the way he dresses, there are also no excuses for making fun of Ivanka Trump and her health. Seriously, Trump opened up about struggling with postpartum depression, as reported by E! News, proving that the condition doesn't discriminate, and should definitely be taken seriously, no matter who it affects.

Speaking to Dr. Oz for Thursday's episode of The Dr. Oz Show, Trump explained that she has suffered from postpartum depression after the births of all three of her children. "With each of my three children I had some level of postpartum," Trump said, confirming Dr. Oz's question that she was referring to postpartum depression, according to E! News.

She continued, explaining how her condition made her question her overall value as a woman and as a mother:

It was a very challenging, emotional time for me, because I felt like I was not living up to my potential as a parent, or as an entrepreneur and an executive. I had had such easy pregnancies that in some way the juxtaposition hit me even harder.

However, Trump also refused to take responsibility for her father's actions, telling Dr. Oz that it isn't her responsibility to inflict her opinions and views onto the president.

So I'm not the decision maker. I have my views and I share them candidly and as a daughter I have the latitude to do that, but I also respect the process and my father is now president and the American people elected him based on his agenda and my job isn't to undermine that agenda, it's to embrace the areas where there's commonality and there are so many areas.

Whatever. Like I said, you might not agree with Trump's attitude towards her father and his administration, but she's still a mom who has faced many of the same challenges so many other moms out there have. "This is something that affects parents all over the country," Trump told Redbook, and she's right. Up to 20 percent of women in the United States struggle with postpartum depression, which is a staggering number.

And while Trump's father may not be backing legislation to help women struggling with postpartum depression find the proper resources to take care of themselves, maybe Trump's discussion with Dr. Oz can lead the way to show Republican lawmakers that women's health really shouldn't be political. Because, at the end of the day, Ivanka Trump is just a mother, and whether she is a Republican, Democrat, Independent, or none of the above, she still deserves respect and compassion. She may not be your favorite person, but she's broadening the conversation about postpartum depression, and that matters.

Moms are tough as heck, and Trump proves that postpartum depression can happen to moms everywhere.