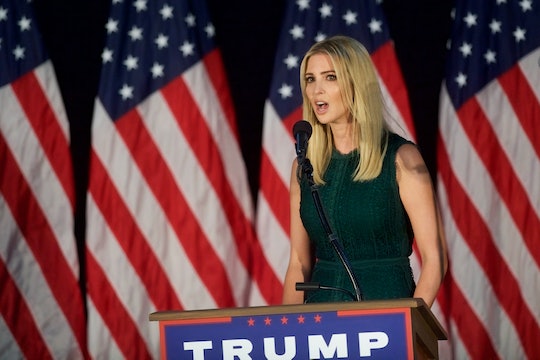 Donald Trump announced several new policies in Aston, Pennsylvania on Tuesday night, and the most surprising one is probably his proposal for six weeks of paid maternity leave. That's right, maternity leave; Trump's paid leave plan would not be available to fathers, sick employees, or those caring for a sick relative. On Good Morning America on Wednesday, Ivanka Trump defended her father's plan, saying that Hillary Clinton hasn't implemented a family leave plan despite holding office for the last "several decades." Wait, what?

"This is not a women's issue," Ivanka said on Tuesday night, when introducing her father's plan, which is exclusively for women. When asked on Wednesday morning why the plan wouldn't be offered to men, Ivanka said, "Hillary Clinton has been around for decades and there's no policy benefiting either mothers or fathers in terms of paid leave," and "certainly she had opportunity to, um, have a concept like that, um, pass." Did she, now?

When GMA anchor Amy Robach pointed out that Clinton plans to guarantee up to 12 weeks of paid family and medical leave for workers of any gender, Ivanka countered, "We have not been in public office for the last several decades, and she has. So she could have instituted some of those policies in that role and has not done so."

Fact check: Clinton served as a senator for eight years and Secretary of State for four. Eight plus four is 12. A decade is 10 years long. "Several" is an inexact word meaning more than two. Three times 10 is 30, and 12 is much, much less than 30. Has Clinton "been in public office for the last several decades"? No, she has not. The Secretary of State's duties deal exclusively with foreign affairs. In her role as a New York Senator, Clinton introduced a bill to extend family leave for the families of armed service members, and several (yes, more than two) involving child care funding and adoption assistance, and another to eliminate the Single Parent Tax Act (advocating for children and families are kind of Clinton's thing). The bills were all forwarded to committees and left to die. Could Clinton have "instituted some of those policies" in either role? No. As a senator, Clinton wasn't authorized to issue Executive Orders. As president, she will be.

Back to the Trumps' plan, for which Donald credits Ivanka: "She is the one who has been pushing for it so hard: 'Daddy, daddy we have to do this,'" he reportedly stated. (Go ahead and take a moment to recover from that involuntary full-body shudder induced by the idea of a woman in her mid-thirties calling her father "Daddy." We good? OK.)

That maternity leave being promised is actually six weeks of unemployment benefits, as CNN reported, which Trump intends to fund by ending the annual estimated $3.3 billion worth of unemployment fraud. According to Vox, however, Clinton's 12-week plan is estimated to cost $30 billion per year. Even half of those benefits, offered to a fraction of workers, still won't be covered by $3.3 billion. It's just unsustainable. And the child care plan revolves around tax deductions, so the forty-odd percent of Americans who are too poor to even owe taxes will be left out.

Also troubling is Ivanka's continued use of the word "we." She seems to imply that she'll somehow serve as her father's co-president if he's elected, and in fact talked herself up on GMA as if she were a candidate, discussing how at her company, she didn't "police sick days or vacation days." So the janitor at the Trump Organization can just stay home whenever he or she wants and get paid for it, no questions asked? Cool policy, Ivanka! Can't wait for your dad to appoint you as Secretary of Labor.