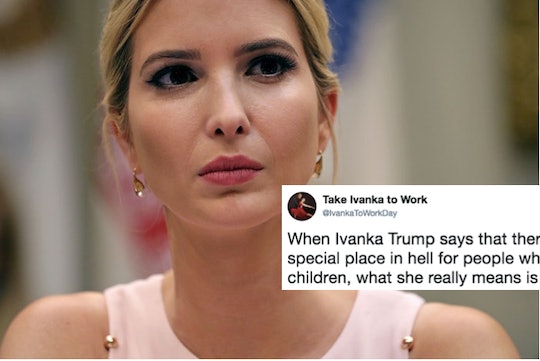 It's been nearly a week since The Washington Post first reported on the sexual misconduct allegations against Republican Alabama Senate candidate Roy Moore — levied by women who were teenagers at the time, including one who was just 14. Since then, even some prominent Republicans have implored Moore to drop out of the race, but President Donald Trump has not personally spoke about the situation publicly. And neither had anyone in his family, until now. In an interview published Wednesday, first daughter Ivanka Trump slammed Roy Moore over the allegations. And unsurprisingly, many people were less than impressed by her vehement rejection of the candidate, considering her continued support of her father. Remember, Donald Trump has been accused of some pretty similar stuff.

Trump's comments about the Roy Moore situation were nestled into an Associated Press article that mostly focused on her work promoting the proposed GOP tax plan, but they are forceful nonetheless. According to the AP, she said of Moore:

There's a special place in hell for people who prey on children. I've yet to see a valid explanation and I have no reason to doubt the victims' accounts.

Trump did not go so far as to implore the uber-conservative Moore to exit the race of his own accord, but it's certainly notable that she publicly said she believes the women who allege that Moore reportedly initiated sexual contact with them when they were teenagers and he was in his 30s. One even alleged that he sexually assaulted her, according to CNN. Moore himself has denied the allegations, and did not respond to Romper's request for comment at the time of publication.

If Trump believed that her harsh words for Moore would earn her some credibility for her self-styled role of champion for women within the White House, it didn't exactly shake out that way. Yes, most of her critics likely agree that those who prey on children should be punished and ostracized accordingly, both right here on Earth and in the hypothetical hell they could one day inhabit. But Trump's comments nevertheless rang hollow.

On Twitter, many users were quick to point out that if Trump has a problem with Moore's alleged actions, then it would only make sense for her to be not so... connected with her father and his administration, considering the seemingly endless slew of sexual assault and misconduct allegations made against him. (For the record, he's denied them all.)

So, with this lingering in the back of many Americans' minds, Twitter responded accordingly:

Considering the nature of the allegations against Moore, many on Twitter started tweeting about reports that the president himself purposely walked in on teen beauty pageant contestants changing, according to People, when he owned the Miss Teen USA beauty pageant in 1997. For many, Trump's willingness to condemn Moore, and to believe his accusers, does not at all square with her continued close ties to her father and his administration. After all, Trump works as an unpaid presidential adviser, and often represents the Trump administration on official business.

So, for some, there's not much that the first daughter could say that would make her any less complicit in their eyes.

To that end, her condemnation of Moore also doesn't change the fact that she is part of an administration that has sought to take health care and essential safety net services from children:

Really, it was just too little, too late:

Admittedly, there's not much that she could say about Moore at this point that would impress her most vehement critics. When it comes to talking about sexual misconduct and believing women, what she would have to do is address her father's alleged past actions, and say she believes those women, too. After all, there really is no "valid explanation" for any of it.