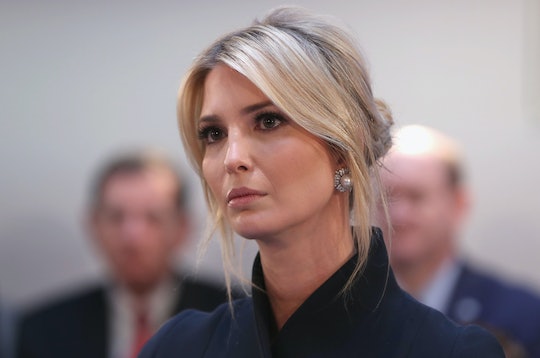 The political landscape is changing — more women, new faces, and a Democratic House takeover are only the beginning. But what's really happening behind the scenes? A lot. Currently, there's quite a bit of focus on the Green New Deal, a comprehensive plan for the nation's environmental and economic future introduced by newcomer and New York Rep. Alexandria Ocasio-Cortez. She's asking everyone to consider a cleaner planet and livable wages. Simple enough. But, not for Ivanka Trump. Ivanka Trump takes on Alexandria Ocasio-Cortez's Green New Deal ideas in a new interview with Fox News.

Perhaps surprisingly, it's not the environmental verbiage that Ivanka has trouble with; it's the part about a guaranteed minimum wage and jobs guarantee that's ruffling her feathers. The Green New Deal suggests that every American deserves a job with "a family-sustaining wage, adequate family and medical leave, paid vacations and retirement security to all people of the United States," according to The Hill.

Trump sat down with Steve Hilton and explained her position in depth, however only a clip has been released thus far.

"I don't think most Americans, in their heart, want to be given something," Trump said in an interview with Fox News. "I have spent a lot of time traveling around this country over the last four years. People want to work for what they get."

She went on, reinforcing her beliefs that this is something the American people do not want.

That didn't sit so well with Ocasio-Cortez, however.

"As a person who actually worked for tips & hourly wages in my life, instead of having to learn about it 2nd-hand, I can tell you that most people want to be paid enough to live," she tweeted in response. "A living wage isn't a gift, it's a right."

AOC pointed out that employees often exceed their job expectations, something their paychecks don't reflect.

"Workers are often paid far less than the value they create," she tweeted.

In fact, wages are so low today compared to actual worker productivity that they are no longer the reflections of worker value as they used to be. Productivity has grown 6.2 x more than pay.

So, how did the Green New Deal come about?

The Intergovernmental Panel on Climate Change released a startling report that said the world is just a decade away from environmental disaster, according to Vox. If carbon emissions and dependence on fossil fuels aren't curbed by this time, the impact of climate change will be inevitable.

The Green New Deal, introduced by Rep. Ocasio-Cortez and her colleague, Senator Ed Markey of Massachusetts, aims to change the economy through the investment in clean-energy jobs and infrastructure, therefore changing the impact civilization is having on the planet.

In other words, cleaning up the environment goes hand in hand with jobs for the American people. And that's where Ocasio-Cortez (and others) want livable wages and jobs for all citizens and more, according to CNBC.

Of course, people took notice of Ivanka's comments, which had many weighing in, including "Daily Show" host, Trevor Noah.

In a statement on Twitter, Ivanka says her comments were misconstrued. "I support a minimum wage," she tweeted. "I do not however believe in a minimum guarantee for people 'unwilling to work' which was the question asked of me."

But, despite the remarks from the president's advisor, who also happens to be his daughter, the Green New Deal seems to be gaining traction with support from presidential hopefuls like Amy Klobuchar, Kamala Harris, Kirsten Gillibrand, Elizabeth Warren and Cory Booker, according to The Hill.

Recent polling suggests that Trump may not be entirely correct — some Americans really do want a jobs guarantee like the one outlined in the Green New Deal.

A 2018 poll by the Harvard School of Politics found that 56 percent of Americans between the ages of 18 and 29 and 63 percent of likely voters from this age group support a federal jobs guarantee.

Whether or not the Green New Deal will continue to gain traction remains to be seen. But one thing is all but certain: Politicians haven't seen the last of arguments from those on either side of the political aisle.