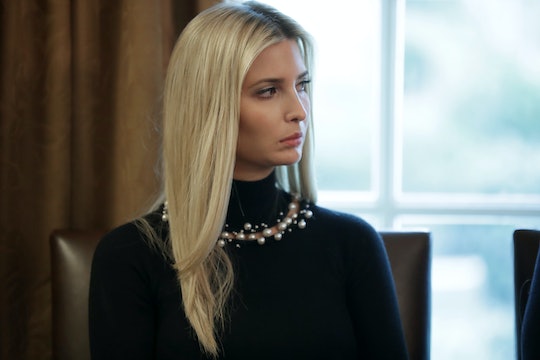 One of the best things about artistic expression is the fact that artwork can mean different things to different people. Case in point: Ivanka Trump's response to this art exhibit with a vacuuming lookalike prompted a much different conversation than what the artist intended. The POTUS' daughter and White House representative described the installation as women "knock[ing] each other down," apparently viewing it as a personal attack.

The exhibit in question is artist Jennifer Rubell's “Ivanka Vacuuming,” a participatory performance wherein an Ivanka Trump lookalike — who is dressed in a pink dress and stiletto shoes — vacuums up crumbs thrown at and around her by the crowd, according to the BBC. Rubell's work is on display at Flashpoint Gallery in Washington, D.C. until Feb. 17. CulturalDC executive director Kristi Maiselman described Rubell's work to HuffPost as "insightful", "timely" and "boundary-pushing" in its reflection of contemporary womanhood. Trump, however, had a much different reaction to the piece.

Trump tweeted an article by The Hill about the installation, along with her take on the art. “Women can choose to knock each other down or build each other up," she wrote, appearing to reference the meaning behind the installation. "I choose the latter.”

The gallery website's description of the installation doesn't come right out and attack Trump. It describes here as "a figure whose public persona incorporates an almost comically wide range of feminine identities — daughter, wife, mother, sister, model, working woman, blonde," and challenges the public to examine the ways in which they interact with the model, as well as the woman she represents. The act of throwing crumbs at her is “open to multiple, often contradictory interpretations that are as critical of the interpreter as they are of the subject,” according to the exhibit website. It is not meant to represent Trump alone, nor represent "one feeling, one relationship or one point of view towards this powerful and sexualized female form."

The gallery described Ivanka Trump as a “contemporary feminine icon,” according to CNN, as well as a symbol of the complexities of modern femininity. Rubell told CulturalDC that it is the interaction between observers and the installation that is being criticized, not Ivanka herself:

Here is what’s complicated: We enjoy throwing the crumbs for Ivanka to vacuum. That is the icky truth at the center of the work. It’s funny, it’s pleasurable, it makes us feel powerful, and we want to do it more. We like having the power to illicit a specific response. Also, we know she’ll keep vacuuming whether we do it or not, so it’s not really our fault, right?

Despite Rubell's attempt to explain the complexity of the meaning behind her work, Ivanka Trump and her brother Eric Trump seem to have taken offense. During a Fox & Friends on Tuesday, Eric slammed the artwork, according to Artsy. He said:

These leftists called up a modeling agency, saying, "You know what, I want to get a nice woman to come stand on a carpet, with a vacuum of all things, so that our people can throw food and crumbs to mimic a powerful woman who has done more for women than probably anyone in Washington, D.C." Think about that hypocrisy.

Even after receiving the backlash, Rubell is insisting that the artwork is not meant to mock. In a tweet of her own, the artist invited Ivanka to see the piece for herself and "form [her] own direct response." She wrote: "I would be happy to arrange for you to do it alone with none of the media circus that has formed around it. Not knocking anyone down. Exploring complicated subjects we all care about."

As Ivanka stated, it is not cool to tear other women down. However, art is subject to interpretation. I think everyone can agree with Rubell that hers is an important, complicated subject to explore.