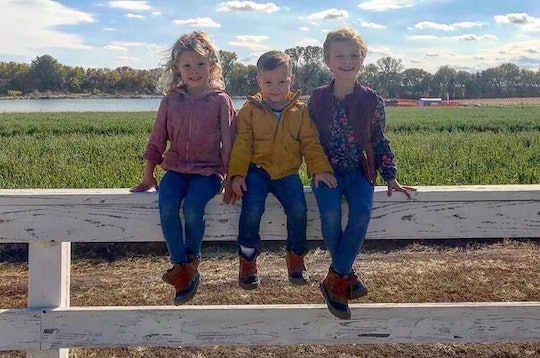 I’ve been prepping for this all summer. We’re only a week in, and there's already $400 of charges on my Amazon card, but to be honest, it’s been worth every penny.

I know $400 seems like a lot, and there are hundreds left to spend, especially once you start calculating the future therapy bills I’m racking up by forcing my kids to stand in a cornfield saying “pumpkins!” for three hours straight, but I can explain:

The Hunter boots for each of my three children were $50 apiece, and that might seem like a lot for shoes my kids will only wear once and promptly outgrow, but they will also serve as succulent planters later, so the ROI is exponential.

The unseasonably warm utility jacket for my son was $30, but I’ll also force him to wear it to preschool every day this fall. Autumn isn’t a single day, it’s an entire season. Really, it’s a whole mood, and frankly, my 4-year-old having eight pockets on his olive-green jacket is integral to that mood.

Then there was the $50 for the Autumnal Decay Preset on VSCO.

The girls were trickier of course, as you can only push the cold weather clothes so far on a hot day without your heretical kids trying to order lemonade slushies at the pumpkin patch. In preparation, I had to get them rust-colored eyelet sundresses (2 for $50), and denim jackets that they will be wearing whether they think they are overheating or not (2 for $40), but sundresses in Autumn? A far cry from first choice, and so to manifest my seasonal ideals, I went ahead and bought puffer vests in navy and cranberry ($50) with matching charcoal corduroys ($15 a pair).

Then there was the $50 for the Autumnal Decay Preset on VSCO. Yes, presets are everything that's wrong with the world, but it’s important to me that I remember this fall existing in a dusty, golden glow. YOLO sure, but you can return to rewritten memories again and again, and from that perspective $50 is actually a f*cking steal.

Also, I get it, dressing my kids like miniature country singers goes against the modern parenting script that says we’re supposed to let our kids dress themselves to exercise the little power they have to express their individual identities. And typically, I’m on board. Hell, I probably shared the meme, but it’s Instagram season, kids, and your neon pink JoJo Siwa jacket simply isn’t working with mommy’s aesthetic.

“What is mommy’s aesthetic?” you ask. I want you to imagine a football player impregnating a flannel plaid blanket in a pumpkin patch. Their baby is my goddamn aesthetic. Now imagine they are raising that baby by a Christmas tree decorated with pumpkins and vinyl maple leaves. Yeah, now you're getting it.

Hell yeah the high today is 84 degrees and I still I pulled out my goldenrod infinity knit scarf.

Curating fun to this degree requires a lot of sacrifice. And I am #blessed by the actual blood, sweat, and tears my family annually offers up on the altar of harvest, if under duress. Like the time my husband cut himself with his pocketknife while carving a jack-o-lantern, and under threat of missing kickoff, kept posing for my pictures anyway, or the time my 8-year-old sweat through her chunky knit sweater because the chambray button down underneath had a chocolate stain on it that just wasn’t compatible with my Fall Funfest vision. And while I’m pretty certain my children's never-ending tears are just pumpkin-donut, sugar-induced, whiny kid theater, there are always many. So thanks for your efforts, fam. #Gratefulheart.

Hell yeah the high today is 84 degrees and I still I pulled out my goldenrod infinity knit scarf, and I’m also going to keg stand hot apple cider even though it tastes like decay, because I don’t have to like it to understand its importance. It’s fall y’all, and that’s all the reason this mama needs.