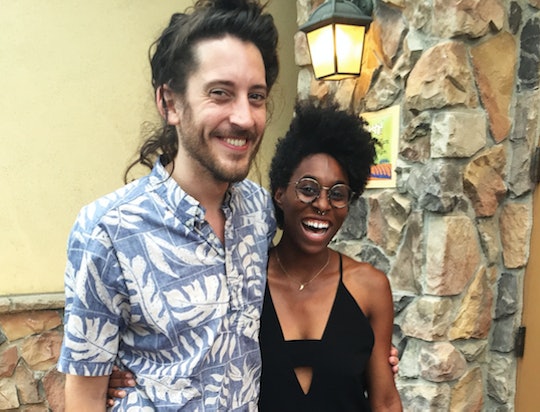 Monogamy has been the standard for relationships, especially ones that are "true" and built upon "love." I grew up internalizing this, seeing this in all the relationships around me, and trying to believe this. As an adult though, I've struggled with the idea that I wouldn't ever be able to love other people because I'd only be allowed to love one person. On the inside, I felt I could love my primary partner while simultaneously having other relationships with people, regardless of whether they were intimate, long-term relationships, or just dating. Even though it wasn't the norm, practicing polyamory has worked for me. But when people judge my sexual identity and my relationships and tell me that love doesn't work that, all of those feelings about what was "right" and "wrong" come rushing back.

These days, after trial and error — and even more trial and error since every person is different — I've learned a lot about what non-monogamy looks like. Monogamy is definitely not for me, and I can also say non-monogamy isn't as glamorous and exciting as its made to look. Believe it or not, non-monogamy, at least in my experience, has been incredibly similar to monogamous relationships, just with multiple people involved. It's something that often confuses my friends. They like to make jokes with me about my "monogamous non-monogamy," and sometimes it's funny, but other times its just annoying. They assume that if I'm looking for relationships outside of my current relationship, it's because there must be a problem. What they don't understand is that, for me, the fact that I could be interested in pursuing relationships other than my primary one because my primary relationship is secure. I feel like they're so quick to label non-monogamy as "cheating" and they forget that cheating is something that stems from what's been broken, damaged, or neglected. Pursuing other people, while practicing ethical polyamory, under those circumstances, are not encouraged. If anything they are discouraged.

Without realizing it, she said one of the most real things about non-monogamy I've ever heard.

I once had a conversation with my mom about polyamory, without letting her know I participated in it. It happened right after my divorce, and while I was actively practicing non-monogamy with my partner, I wasn't ready to deal with what I assumed would be my mom's judgment on the topic, because, knowing her, she'd likely have plenty of it. As we were talking, she said:

Is this what people do when they can't love someone, and they just want something new because they're bored?

I remember laughing because I had that mindset once, and I explained to her that some people feel that their love for their primary partner(s) actually grows the more people they bring into their relationship. I reminded her that we can love people in so many different ways, and that loving looks different for everyone involved. She said she understood, and made a joke about how she wouldn't have enough time. Without realizing it, she said one of the most real things about non-monogamy I've ever heard. Building relationships, and then building other relationships does take time — and sometimes it's time you don't actually have, or want to give to other people. And it's always amusing when people assume that you have a bunch of boyfriends and girlfriends just like, hanging around. I can barely keep up with my one partner, how would I be able to keep up with five?!

On another occasion, I was talking to a fellow parent during a playdate when I mentioned that I'd gone on a date with a new person. They asked me why, because, well, wasn't I with Noah? I realized that not everyone is up to speed on how I date or on the non-monogamous lifestyle I lead, so I explained to her that I date multiple people, and that sometimes I'm dating a handful of partners and sometimes I have just one or two. Her face reflected her disbelief.

I try to be open about my choices to not be monogamous. I make sure that not to condemn those who choose to have their relationship look a certain way because I've learned that love looks totally different for everyone.

But you're a mom! Isn't it confusing to your children? Parent's can't do things like that!

I asked, why not? What does being a parent have to do with dating? I understand where judgment and skepticism comes from, because I held those views at one point without even knowing why I had them. It's hard to grasp how doing something so far outside of what we've been told is the "right" way could thrive and actually be healthy. So because of this, I try to be open about my choices to not be monogamous. I make sure that not to condemn those who choose to have their relationship look a certain way because I've learned that love looks totally different for everyone. It doesn't bother me that works for me also just happens to be unconventional to some.

When I started practicing polyamory, I tried keeping it to myself. But it eventually made its way into more and more of my conversations, and has become something that I talk about openly without thinking. It's part of who I am. Part of my normal. My idea of what's "normal" doesn't match society's idea of what normal is, and I'm perfectly fine with that. I'm also very comfortable with talking about non-monogamy because I think it gives people an opportunity to ask about it, and actually learn what it means. Sex is wonderful, but it's definitely not just based around "having extra sex." For me, sex is rooted in an outpouring of love and my ability and need to share that. And how I choose to love — well, that's my choice.