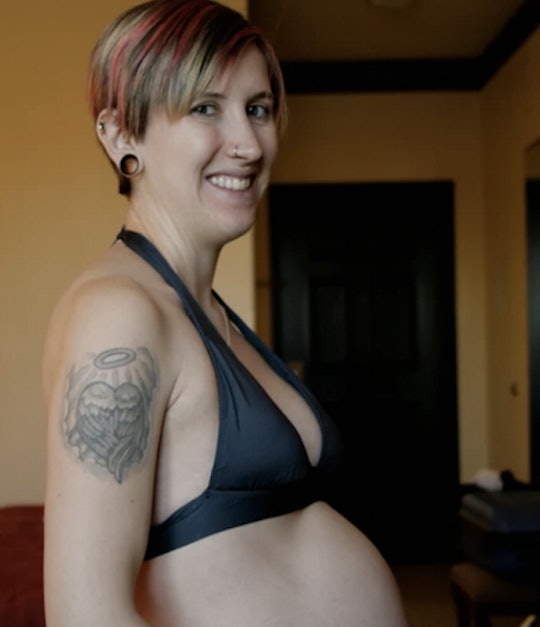 I've Never Felt Sexier Than When I Was Pregnant

When I first read that Angelina Jolie told Vanity Fair that pregnancy made her feel sexy and womanly, I cringed. (I was young, ignorant and, uh, not pregnant at the time.) I couldn’t understand how gaining weight could make you feel beautiful. I didn’t think cankles were cute, I didn’t know how a swollen midsection could be sensuous, and I didn’t think morning sickness would make me feel graceful, gorgeous, or even good. Then I got pregnant. And while the morning sickness still sucked, it was only after I got pregnant — after my body had slowly begun to change, as did my bra size — that I truly understood what Jolie meant. Because when I was pregnant, I felt beautiful. I felt unstoppable. I felt whole.

It wasn't that I was "born this way" or anything, because when I was young I was confident and outgoing. I wore mismatched socks and green canvas Keds because I could, and because they made me happy. I sang in show choir, acted in all the school plays, and I even danced to “Crocodile Rock” in the middle of Nicole Lane, but shortly after moving to New Jersey (when I was just 12 or 13), I became hyperaware of my appearance.

Peers made fun of my clothes, which — thanks to my father’s death and family’s financial downfall — were at least two sizes too small, and someone even had the audacity to make fun of my favorite sneakers. (Who the hell doesn’t like olive-colored kicks?) Instead of standing up for myself, instead of embracing my differences and my uniqueness, I caved. I threw out my Keds and covered up my body in clothes I knew I would never grow out of. I was less than 100 pounds and wore size eight pants and large (sometimes even extra large) shirts. I became a wallflower — a scrunchie-sporting, training bra-wielding wallflower, so ashamed of her body and her appearance.

It was also around this time that the voice in my head, the one that told me I was fat, flat-chested, ugly, flawed, and entirely unlovable, started to speak loudly and clearly enough for me to hear it. I kept the thoughts to myself and assumed that every teenage girl went through this phase. But before long, these thoughts became all-consuming. I was swimming and drowning in them, willing to do anything and everything to silence them and prove them wrong, even if that meant not eating and not sleeping. Even if that meant shutting up and shutting down.

Before long, I was counting calories, cutting out entire food groups and exercising secretly and incessantly. I skipped meals and bailed on any and all social situations that involved food. Before long my "diet" morphed into a disorder, though my eating disorder not otherwise specified (known as EDNOS) and body dysmorphia diagnosis were still years away.

I knew every pound I gained made her bigger and stronger, but they also made me bigger and stronger. For the first time in my life, I let go: of expectations and the voice in my head and I gave myself the freedom to just go with whatever was happening.

When I found out I was expecting, my mind immediately shifted from myself to the baby growing in my belly. I knew every pound I gained made her bigger and stronger, but they also made me bigger and stronger. For the first time in my life, I let go: of expectations and the voice in my head and I gave myself the freedom to just go with whatever was happening. I ate when I wanted, I worked out when I could, and I stopped to nap whenever I needed. I pampered my body and my mind and, as a result, I was growing and glowing. I loved the life within me, the energy flowing through me, and I felt perfect and beautiful. I felt sexy, curvaceous, luscious, and absolutely unstoppable.

I loved the roundness of my belly, the luxuriousness of my breasts — now a size C! — and the promise that came with life, namely the fact that it was my daughter’s.

I felt so sexy, in fact, that I wore “revealing” tops until I was 36 weeks. I rocked a bikini in my 38 week, and I took nude selfies — proudly — the same day I went into labor. I loved the roundness of my belly, the luxuriousness of my breasts — now a size C! — and the promise that came with life, namely the fact that it was my daughter’s. For the first time in my life, I knew what mattered. Youth is great and having a tight little body is marvelous, but skin gives and sizes change and youth is a fleeting feeling. What matters isn’t some number on a scale or some tag on the inside of my clothes, what mattered more than any of that was how I felt.

Two-and-half years later, I still feel sexy. Not conventionally so — my chest is still flat and I still criticize my "flaws" — but I feel sexy in an "I don't give an F" sorta way. A confident way. An "I had a child and that changed me, but that's OK" sorta way. Sure, the best thing I gained from my pregnancy was (of course) my smart, sassy, and sweet little girl, but I also gained perspective, a new outlook on my life, and a new outlook on my body. I am not 100 percent sure why, I think it was because pregnancy shifted my attention from what was going on with my body to what I was growing inside my body. Pregnancy silenced the voices in my head — the ones that told me I wasn't pretty enough, or good enough — telling them they didn't matter. None of that mattered. And pregnancy removed "me" from the equation. Somehow that made it easier.

More Like This
Fun, Sexy Maternity Lingerie, For When The Mood Strikes
Here's What Pregnant People Actually Want For Valentine's Day
Meghan Trainor Shares Baby News After Dropping Hints On TikTok
How To Fly Safely During Pregnancy
What Parents Are Talking About — Delivered Straight To Your Inbox