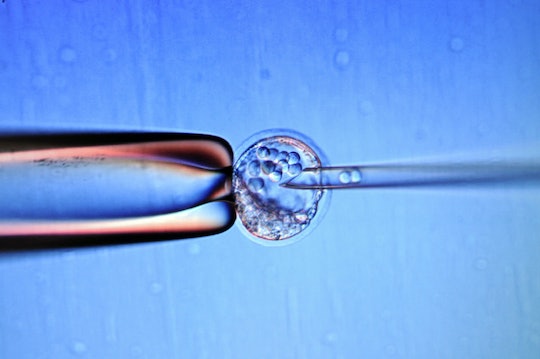 IVF Doesn’t Raise Breast Cancer Risk, According To A New Study, & It's A Huge Relief

A study from researchers in the Netherlands has found that IVF doesn't raise breast cancer risks for women who undergo this now-common fertility treatment procedure. The IVF breast cancer study was published in JAMA on Tuesday. Much like the ongoing controversy about whether wine and chocolate increase or decrease a person's risk of cancer, this latest study on IVF and breast cancer comes after decades of intense scientific research and debate on whether the fertility drugs used during the IVF procedure could increase a woman's risk for breast cancer.

Researchers followed over 19,000 Dutch women who started IVF treatments across all of the Netherlands' fertility clinics between 1983 and 1995. The non-IVF group consisted of just under 6,000 Dutch women who underwent other forms of fertility treatments at Dutch fertility clinics between 1980 and 1995. The median age of all research subjects was 32.8 years. What makes this latest study so significant compared to the studies that have come before it is that this study out of the Netherlands is perhaps one of the largest studies on the link between IVF and breast cancer risk to date.

The biggest finding from the study stated that, "Breast cancer risk among IVF-treated women was also not significantly different from that in the general population" — which means if you're a woman like me who's undergone IVF to have her family, you can let out a big sigh of relief.

But what about the debate regarding how IVF may or may not increase the risk of breast cancer? A 2012 study out of Australia with 21,000 participants found that women who started IVF at a young age were more likely to develop breast cancer in the 15 years following their treatment. The following year, said just the opposite: A meta-analysis of eight smaller studies concluded that there wasn't a link to increased breast cancer risk after IVF. That same year, another study concluded that women who had multiples after IVF — twins, triplets, or higher order multiples — were more likely to develop breast cancer than those who had singletons after IVF. And those are just three studies — there have been thousands of studies on IVF and breast cancer risks.

Of course, as with every scientific study, there are some important things to consider about why this particular study stands apart from all the others: Studying over 25,000 women is a pretty huge sample. While it's certainly not the final word on the how IVF and fertility drugs can affect a woman's body and her long-term health, Tuesday's study does provide some reassurance given its sample size. No other previous study that examined the link between IVF and breast cancer has had the massive sample size that Tuesday's study had.

So why does any of this matter now? Whether you're a woman trying to build her family through IVF and worried about potential health risks or a mom who's had IVF, this latest study gives some peace of mind on the already burgeoning list of things to consider when undergoing fertility treatments.