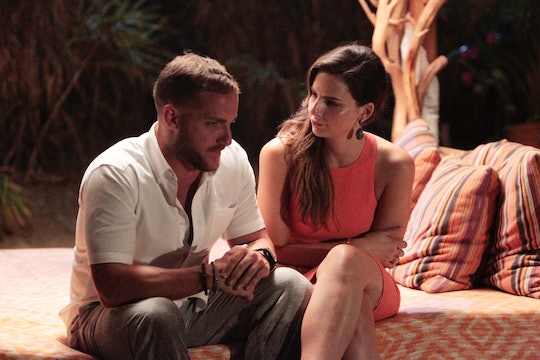 Izzy and Vinny have been one of the most solid couples on Bachelor in Paradise since day one. They have even shortened their names to the extremely adorable portmanteau "Vizzy." That is, until some newcomers arrived. Izzy and Vinny have a huge fight on Bachelor in Paradise and a new bachelor is the reason. As soon as Brett (and his lamp prop) arrive in Paradise, Izzy tells the other women that if she was to draw herself a man, he would look like Brett. She then shares her doubts with Vinny, who does not take it very well.

Everyone was surprised, to say the least, to find that Izzy and Vinny were seconds away from imploding. They all assumed that Vizzy was the strongest couple at the resort, until Izzy's knee-jerk attraction to Brett sabotaged their whole margarita-feuled fairytale relationship. Izzy was "freaking out" about her attraction to Brett, and when she told Vinny that it was causing her to second guess herself, he was stunned, to say the least. Vinny wasn't the most eloquent or graceful he's ever been (or maybe he was?) but his distress was definitely sincere. Vinny thought their relationship was solid, and was ready to commit to the long haul, and was completely blindsided to see that that's not necessarily how Izzy felt.

To be fair, Izzy is totally within her rights to feel however girlfriend wants to feel. Maybe she's just not that into Vinny! That's okay! But knowing that did not make it any easier to see Vinny's heartbreak, or warning his crew of supportive dudes that if they rub his back he's going to cry. Vinny described himself as heartbroken and crushed, and it was obvious to see in his face. "Holding on to what I thought I had with Izzy made it worthwhile, being here," he said. And then I just melted.

I also have to align myself with #teamvinny when he expressed surprise that Izzy would be so attracted to a guy wearing rolled up jeans with sandals that he would end their good relationship. Excellent point, Vinsane. While the episode ends on a cliffhanger, right before Vinny confronts Izzy the day after her confession, I would be extremely surprised if they don't break up. Then again, stranger things have happened.