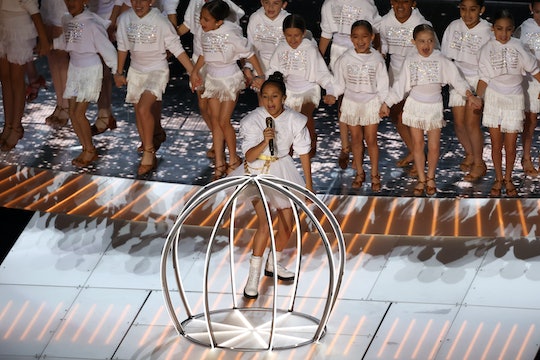 If you happened to watch the Super Bowl LIV halftime show, then you were likely blown away by its high-energy choreography and fanfare. There was just so much going on during those 15 minutes. It. Was. Awesome. If you weren't paying close attention to the details, however, you might have missed that J. Lo and Shakira's halftime show gave separated families center stage.

Toward the end of the halftime show, there was subtle — and not-so subtle — imagery that plenty of viewers missed the first time around. It’s definitely worth re-watching Shakira and J. Lo’s performance to check it out. Because once it all clicks, you won’t be able to un-see it.

Twitter user @luthorswift was among the first to point it out, even though it was right there in front of us all along. “HOW IS NO ONE TALKING ABOUT THIS POWERFUL YET SUBTLE STATEMENT,” they tweeted alongside the image, clear as day, of children sitting under lighted arches. The scene unfolded as J. Lo was joined onstage by her daughter Emme — along with dozens of other kids — for the song “Let’s Get Loud.”

Kids in cages. It was all right there under our noses the entire time. But wait, there's more. Another Twitter user pointed out, “Also the lights behind them towards the end looked like a fence. Brilliant.”

Yet another Twitter user added, “The cages, the American flags on the kids sweaters, the Puerto Rico flag on the stage, so much imagery!”

Knowing all of this now, I invite you to go back and re-watch the Super Bowl halftime performance in its entirety — and see it in a whole new light.