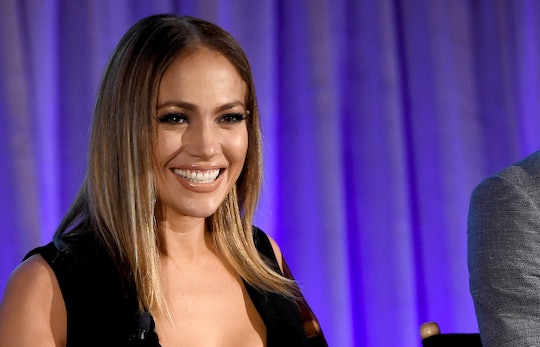 Jennifer Lopez is a proud auntie, and the way that she shares her pride has fans cheering. The gender-neutral phrasing in J. Lo's Instagram post may only have been intended to support one person, but it's a huge deal for the queer community. Here's the full caption:

This is Brendan my sister Leslie's second child!! They were the one person selected to represent their school at #globalyoungleadersconference in Washington DC!!! And I couldn't be more proud!!! Brendan is strong and smart and loving and a obviously a leader!! Titi Jenn loves you!! #superproudauntie#familia❤

First of all, way to go, Brendan! That's a great honor, and we shouldn't sweep their achievement under the rug, because that was the actual point of the post.

That being said, J. Lo's use of gender-neutral pronouns and reference to Brendan as her "sister Leslie's second child" show that it's not difficult to treat non-binary people with respect (although it would be nice if the English language could evolve to the point where we have a commonly accepted non-gendered term for a sibling's child). Also noteworthy is the fact that Lopez didn't call attention to Brendan's gender identity, because it's not relevant to the subject of her post.

The point is that if you meet a person who prefers gender-neutral pronouns, use them, and leave it at that. You don't need to know if they identify as transgender, gender non-conforming, non-binary, genderqueer, genderfluid, or anything else, just as your average cisgender person isn't expected to explain their gender expression to everyone they meet. And yes, it can be hard to get used to using "they" and "their" to refer to a single individual when you've spent a lifetime using it only for groups of two or more. But it also feels weird when you meet a human who has the same name as your cat, and you have to re-learn the meaning of that word. Trust me, you'll get over it faster than you think.

Those points weren't lost on J. Lo's fans, and the comments on her post are (mostly) heartwarming. "Congratulations Brendan!!! What an honor!! And thank you @jlo for accepting their preferred pronouns and being an example for others!!" wrote Instagram user empiricallyerin. "This is so great on SO MANY levels. Thank you @jlo And CONGRATS Brendan! #nonbinary," wrote user msjamieclayton. User navarromarlene6 commented, "Congrats Brendan you are the future! Family support is important especially from a role model like Titi Jenn." And user dextrovert summed it up beautifully: "What a post! Excellent @jlo for the pronoun and your support of a humans choice to be who they need to be."

There were also a handful of messages that seemed well intentioned, but referred to Brendan as J. Lo's "niece" or "nephew," or used gendered pronouns. While it appears that these users meant no ill will, it also highlights an important point: pay attention to the pronouns people use, and mirror them. Never attempt to "correct" someone's language, and don't make assumptions about someone else's gender identity. These people obviously wanted to show support for J. Lo and her family, but misgendering Brendan is disrespectful, whether or not that was the intent. Taking a moment to ensure that you're using the proper terminology really isn't a burden, and honestly, it's the bare minimum that everyone deserves.