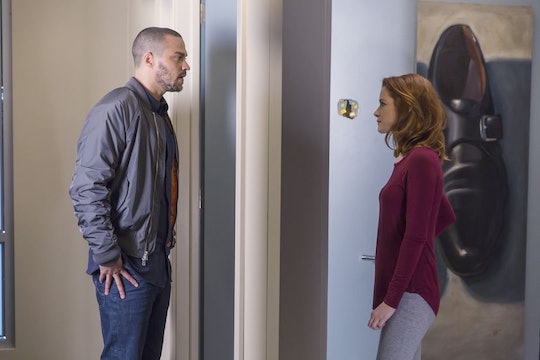 Jackson & April Fight Over The Baby On 'Grey's Anatomy,' & It Might Be Their Final Demise

If you thought watching Jackson and April getting a divorce on Grey's Anatomy was heartbreaking, you probably didn't handle Thursday's episode too well. Recently, Arizona revealed to Jackson that April is pregnant on Grey's Anatomy, and, as could be expected, Jackson didn't take the news well. In fact, he took it so poorly that he told April he wouldn't help with their baby.

April admits to Jackson that she knew she was pregnant before the divorce, and Jackson is clearly furious, believing that she should have told him before they signed the papers. Before Jackson can further make his point April leaves to head to the ER, telling him they'll discuss it later. But Jackson can't wait until "later." As soon as April leaves the O.R., Jackson is right beside her, questioning how she could tell Arizona before she told Jackson. April says, again, that she can't talk about it at the moment but Jackson doesn't listen. Soon they're having a screaming match in the middle of the hospital with everyone watching including Dr. Bailey, Dr. Hunt, Dr. Riggs, and Dr. Weber.

Bailey and Weber try to stop the fight, but neither April or Jackson care to listen. April explains that she didn't want him to stay married to her because of "her" child, she wanted him to be with her for her. Jackson quickly jumps on the fact that April refers to the baby as her's rather than "ours" and accuses her of acting like a martyr. He then tells her that if she wants to act like she has to do everything on her own, then she should do everything on her own. Ouch!

After seeing "Japril: The Movie" not too long ago, watching Jackson and April rip into each other like that was heart wrenching. Thankfully, Weber quickly went after Jackson and reminded him that it doesn't matter when you find out you're a father, it just matters that you're there once you do.

Weber's speech seemed to work and Jackson made his way to April's door to apologize for the way he acted. April apologizes, too, for not telling him sooner but explains that she didn't want them to go through the same thing they went through with Samuel, their son, and she wanted to wait until she was further along.

And just when things seemed to be going well, that's when Jackson asks April if she was waiting until it was "too late" for her to terminate the pregnancy. For Jackson, he'd rather not go through with the pregnancy if it was going to end the same way. After that, any chance of the two reconciling shattered because, for April, getting an abortion is not an option. It's her body, and Jackson is no longer her husband — he has no say in the matter. In the end, it looks like Jackson may not be in the baby's life after all.