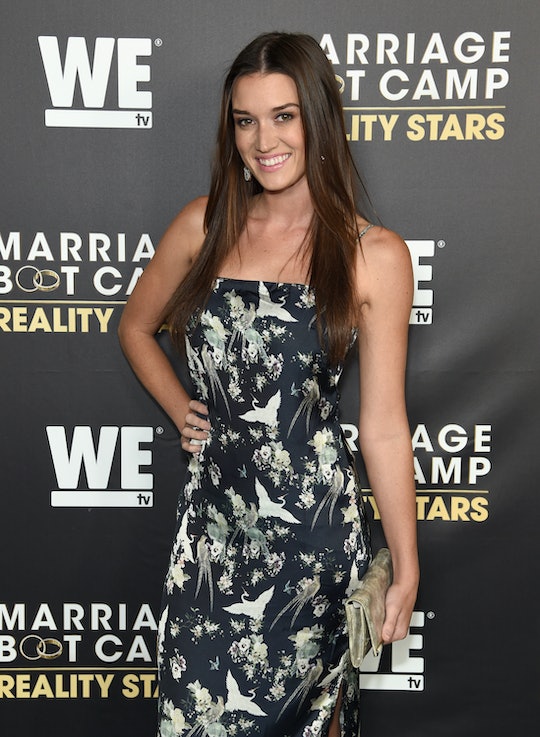 Some expecting mothers are willing to do some pretty wild things to speed up the labor and delivery process, and even celebrities are getting in on the fun. Case in point: Pregnant Bachelor alum Jade Roper ate a "pregnancy salad" to induce labor, prompting some fans to wonder if the so-called hack actually works. Here's everything you need to know about this curious trend.

Roper is currently expecting her second child (and first son) with her husband, Tanner Tolbert. She is around 38 weeks pregnant and is getting a little impatient awaiting her baby's arrival within the next two weeks. But there's a reason why she's ready to welcome her son into the world right now — she's slated to be in a wedding for fellow Bachelor alum and BFF, Ashley Iaconetti, with Tolbert officiating it, according to Access Hollywood. And that wedding date happens to coincide with her due date. Uh-oh. So, she definitely wants to go into labor sooner than later.

Luckily, Iaconetti came to the rescue this weekend when she bought Roper a "pregnancy salad" to help induce her labor, according to Us Weekly. Iaconetti purchased the salad from a Los Angeles café — but it didn't work for Roper. She wrote in a post on her Instagram story that her water did not break, but she was feeling her baby move a lot more. So the salad could have worked. Hmm.

Before getting into it, there's a few things that people need to know about the "Maternity Salad," which has been successfully feeding expecting moms for more than 20 years. Caioti Pizza Café has been serving what they call "THE" Salad to pregnant women to help them induce labor. The salad is made with romaine lettuce, watercress, walnuts, gorgonzola cheese, and a homemade balsamic vinaigrette.

Not only does the salad sound delicious, but it has been credited in inducing labor for dozens of women, according to LA Weekly. Celebrities like Hilary Duff and Carson Daly's wife, Siri Daly, have been spotted eating "THE" Salad towards the end of their pregnancy, proving that even they are willing to try anything to speed up their labor. The dressing is supposedly the catalyst when it comes to giving birth, according to TODAY, and the ingredients are top secret.

But, there isn't any evidence out there that supports the fact that certain foods can directly put expecting mothers into labor. Most tips and tricks that are credited in inducing labor are actually myths, according to The New York Times. While some women might swear that certain foods put them into labor, there is no scientific evidence to suggest any kind of food — from salad to very spicy food — will make the baby come faster, according to the Cleveland Clinic.

Although many expecting moms are willing to try many different things to meet their baby, food won't get them out any sooner. That being said, however, it doesn't hurt to try. Eating the "pregnancy salad" will just set expecting parents back a few dollars but will be incredibly satisfying, especially if the baby arrives afterwards. And if the baby doesn't arrive, well, at least you got to enjoy a salad. Good luck, Jade!