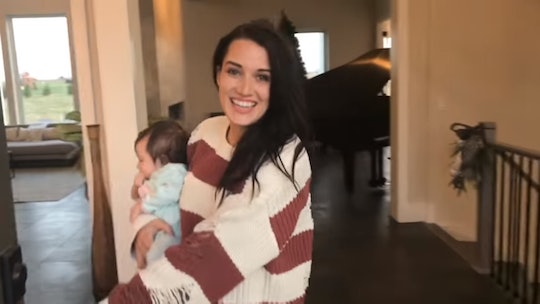 As a former reality dating show contestant who now makes a living through sponsored social media posts, you might not expect Jade Roper Tolbert's most honest mom moments to appear on her perfectly curated Instagram feed. While the near-constant plugs for health tracking bracelets and powdered beverages that claim to increase lactation can feel a bit insincere, if you dig deeper, you'll see that when she's not hustling to provide for her daughter, Emerson Avery, Tolbert actually does show fans the real, unvarnished side of motherhood. OK, fine, she brushes her hair first, but cut the woman a little slack; she is posting those pics on the internet, after all!

Tolbert faced criticism for one of her sponsored posts earlier this month after fans claimed she was setting an impossible standard by looking halfway decent while breastfeeding. She responded to her critics in a followup Instagram story, according to Us Weekly, explaining that while she was wearing a bit of makeup in the original post, it was actually left over from a photo shoot she'd done the previous day; not only had she not gotten all dolled up, she hadn't even washed her face yet. And although she admitted that Emerson's position had been adjusted for the pic, she said, "we do have those moments where we snuggle, so I don't get what’s so unreal about it." Let those who have never posed their baby for a photo cast the first stone.

In the same Instagram story, Tolbert also responded to complaints about her choice to cover up while breastfeeding, Us reported:

My baby is feeding right now, and I'm still going to cover up, because that's what I feel the most comfortable with. I feel like I don't need to share all of that with the world; that's not the message. It's just that women should be able to do what they feel like they need to do for their babies.

Women shouldn't feel ashamed of feeding their babies, no matter how they choose to do it. Shaming a woman for covering up, not covering up, or using formula are all equally wrong. While Tolbert shouldn't feel like she has to cover up because of society's expectations, she's also not required to bare it all. For some, not covering up is a way to assert their right to feed their baby the way they choose to, but for Tolbert, it would actually be the opposite. Covering is her choice, and she doesn't need to defend it.

Tolbert also gets real on the regular when it comes to one of the most infuriating subjects related to early motherhood: the "post-baby body," which far too many people believe is supposed to be exactly the same — or return to a similar state — as a pre-baby body (it is not). Last August, just after giving birth, Tolbert casually acknowledged that idea in a sponsored post, referring her postpartum body as the "new normal." In December, she explored the topic further, writing that post-pregnancy bodies are "always just slightly different, transformed with a new purpose." She admitted to feeling badly about some of the unwanted changes, but concluded that she has a "such a new found respect for my body even through all the changes," adding, "Our bodies are amazing."

Tolbert's captions also reveal what her actual day-to-day really looks like. The first month of Emerson's life was "physically draining at times, emotionally demanding, and void of really any quality sleep," she shared. A few weeks later, she posted a throwback photo, admitting that currently, she was "still wearing the same crusty nursing tank from yesterday," her hair hadn't been washed in five days, and she was "shoving ungodly amounts of Chinese food into [her] mouth." And just like every other mom you know, she often forgets the laundry in the washing machine until it's started to grow mildew. She may have to present a perfect image of motherhood to earn a living, but she's perfectly happy to admit that it's not real.