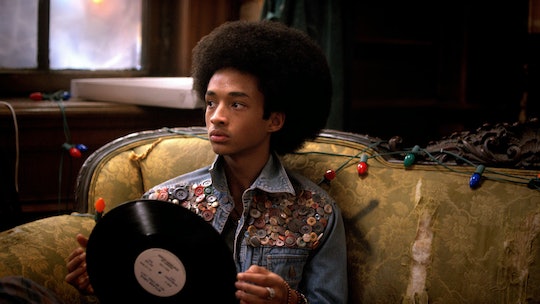 (Warning: This post contains spoilers for Episode 6 of The Get Down.) Though the majority of the action on The Get Down is contained to the Bronx, the setting branches out as the characters begin to follow new paths and opportunities. Jaden Smith's Dizzee, though an important part of the main group of kids, is still a little bit on the fringes thanks to his chill, too cool vibe (Jaden taking a little inspiration from Jaden there) and his interest in graffiti art, which sets him apart somewhat. When Dizzee meets another graffiti artist, Thor, it's clear the two boys have an immediate connection. Eventually Thor invites Dizzee along to a SoHo party and it pulls him into a very different part of New York than the one he grew up in. Jaden Smith's club scene on The Get Down in Episode 6 is important for a lot of reasons, and it's great that the show decided to explore another perspective.

The party reveals a very different side of the '70s than the show had dealt with up until that point. It was a time of many varied subcultures all beginning to grow and push through to the mainstream: there was hip hop, the show's main focus, and punk, which is mentioned in passing, but there was also a very distinct LGBTQ subculture in New York. It was really the start of things becoming more open and free, which is alluded to during the club scene on the show. It's a time and place where people can experience a kind of freedom that was only just beginning to explode: a freedom to blur expected boundaries and be transgressive, to explore your sexuality and your gender identity. A freedom to be yourself as you truly are and not have to hide it anymore.

The club scene features a world Dizzee has never experienced before: there are glamorous drag queens voguing on a catwalk and people of all different sexual orientations. Thor sums it all up when he tells Dizzee, "This is where the free people run free."

Freedom to break out of your predetermined path and find the place you really belong is a big theme of the show – and, arguably, a big part of the actual '70s. Every decade has its huge changes, but the '70s were really a time for openness, particularly when it came to sexuality and gender identity. When Dizzee asks if the voguing drag queens are men or women, Thor's female friend (sporting a fantastic sequined hat, it must be said) explains it to him: "Both. Boys dressed as girls, boys with girls trapped inside. Boys changing into girls. Girls who got tired of being boys."

That new sense of freedom allows Dizzee to act on his burgeoning attraction to Thor and kiss him; for all the complaints about Jaden Smith's acting (oft warranted), it's easy to read in Dizzee's face just what a big deal this is. It was clearly not something that was possible to him before stepping into that club. The '70s were a time when it was starting to feel realistically possible to be yourself, particularly if you were in the LGBTQ community. It's an important part in our history and culture, and it's fantastic that the show decided to explore something so important, even in a small way.