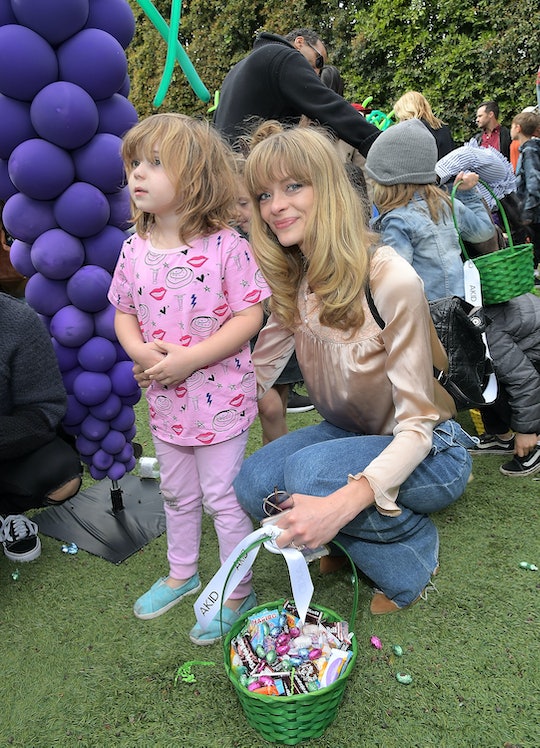 Jaime King's son has an unusual birthday request. According to the Black Summer actress, he asked for composting in the backyard for his birthday. "He's been asking me that like every single day," she tells me over the phone during her interview for Romper. King's parenting style allows her kids to be totally free (within the bounds of reason and safety) and she's teaching them important values like compassion, the basics of consent, and concern for the earth. And her methods are backed up by experts.

Having grown up in a loving but practical midwestern household in the '90s, I find myself both attracted to King's Earth Mama vibe and doubtful her household is as idyllic as she makes it seem. King's two sons, 5-year-old James Knight and 3-year-old Leo Thames, are raised not just by her but by a small village of helpers, including god-parents (like Taylor Swift), friends, and family. James and Leo are encouraged to be as free as possible, to be grateful to the Earth, and to respect one another. They don't hear the word "no" and they make their own choices. Honestly, my first thought after hearing this was, "Do people really succeed in living this way?"

When I express disbelief that a 5-year-old kid would ask for composting to be his birthday activity, King assures me it's totally true. "I used to have a compost in my backyard and something happened with it and he keeps asking for one," she says, continuing, "And when they say their prayers before dinner or at bedtime, they always say, 'Mom, I’m grateful for the sun, I’m grateful for this planet, I’m grateful for the trees, I’m grateful for this life.' They have this really incredible connection to this planet and preserving it." It's clear that sustainability and preserving the Earth is important to King, from her partnership with environmentally conscious toiletries brand Tom's of Maine (and the brand's Charcoal for Charity campaign) to the values she's teaching her children — apparently with startling efficacy.

...from the minute that they’re born, if we respect them and we tell them what it is that we are doing with them and their bodies ... it creates an intimacy, it creates a trust, it creates respect...

As told to me, King's parenting ethos can be distilled into two major categories: verbalizing basically everything and allowing her kids their independence and space.

And, as I've mentioned, it turns out experts agree. Maureen Healy, author of The Emotionally Healthy Child, and child development expert at Growinghappykids.com tells me, "I am a big advocate for explaining to children from the get-go why mom is doing something, or sharing with them what's going to happen. Children are small and new to the world, but they're not lacking intelligence." She continues by saying, "The more we help boys learn early on about what healthy boundaries and touch feels like — the better chance they're going to internalize those lessons, and extend them out into the world, especially as they mature."

Teaching her boys about healthy physical boundaries — and thus consent — while they're still young is another thing that's important to King. But how do you teach a 5-year-old consent? He's, you know, five.

King does it by telling her boys to respect one another's yes's and no's. So if one kid wants to hug his brother but the brother in question doesn't feel like being touched, the hugger has to respect his brother's no. This didn't seem that groundbreaking until I remembered my own childhood when we weren't actually allowed to say no to hugs. "We don't reject love," was the rule when I tried to squirm away from my brother's enthusiastic cuddles.

Healy expands on why this is important: "Teaching children to respect each other's 'yes' and 'no' responses is important. Words matter. Helping children learn healthy boundaries is essential as they grow up, and eventually need to advocate for themselves (for example: telling the playground bully to stop and get away)."

King's commitment to positivity, love, and free will extends to every aspect of her parenting. She tells me she avoids telling her kids "no" and phrases her instructions in a positive way instead. For example, King won't tell her children "don't spill!" — she'll tell them, "keep the cup steady!"

She gives the kids plenty of warning before they have to clean up their toys and go. When they mess up she explains how it makes her feel and encourages them to express their emotions, too.

Just a quick scroll through her Instagram provides plenty of evidence of her loving parenting style. For example, in 2018 James accompanied her to a movie premiere wearing the ruffly pink dress he picked out. It would be nice to believe we're in a society when a small kid can wear whatever they want without people having opinions, but, unfortunately, that's not where we are yet.

So, now I'm left with this image of these impossibly serene children, running around barefoot in tutus and never throwing fits. They grow herbs in the garden and eat organic vegan food and say they're grateful for the ocean. These earth-conscious and emotionally aware kids would never dream of eating magic markers or throwing Legos at each other in the middle of Target. Could these children be real? Could this life be real? I don't know. Give King's method a try at home and let me know.