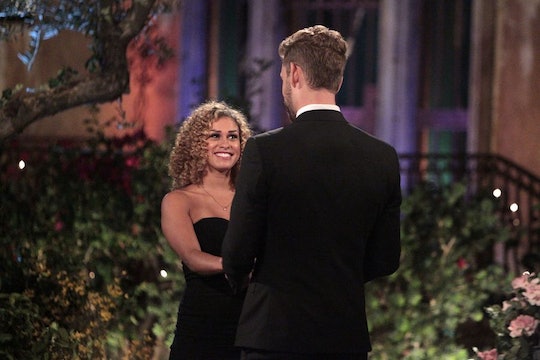 'The Bachelor' Revealed A Groundbreaking Moment

Season 21 of The Bachelor is in full swing with Nick Viall at the helm on his fourth tour of duty. As the first night played out, Nick seemed grounded, calm, and genuinely appreciative of the opportunity to be there. Plus, he's doing a stellar job of empowering his contestants throughout the process, reassuring them before the very first rose ceremony that each woman in attendance was worthy of love — even if he had to say goodbye to a few of them in a moment. But when Jaimi mentioned her ex-girlfriend on The Bachelor promo for the season to come, that's when Nick really shined.

We aren't given a lot of details in the promo, but we do get to see a clip of Jaimi and Nick kissing while cuddled up on a couch, which then cuts to Jaimi in a one-on-one interview saying, "Nick was really receptive to my past relationship with my ex-girlfriend. It felt good to kind of set the stage for the rest of my time here."

So we know she's previously dated a woman. We know she tells Nick about it. And we can infer that she felt at least a little anxiety about how the reveal would go, based on the relief she expresses afterwards. Since we don't know anything more about how Jaimi self-identifies, it's a little early to start flying the "first queer Bachelor contestant hooray!" flag, as badly as some fans may want to. It would be a groundbreaking moment for the show's queer visibility if Jaimi openly identified herself as standing somewhere under the queer umbrella during the course of the season. (Besides a couple of Bachelor Australia contestants falling for each other and running off together, there hasn't been any mainstream conversation about queer identity within The Bachelor franchise.) But as of right now, Jaimi's romantic history with one woman is all we have to go on.

Although Nick's reaction to Jaimi's sexual orientation is the least important piece of what she means to the show, it's heartening to hear that he responded in a seemingly supportive way, which helped Jaimi feel safe continuing to date him. (And anyway: national television is not the place to be a jerk about your weird sexuality hangups, should they exist. Bachelor Nation has a very gay-heavy fanbase who wouldn't hesitate to shut that down.) Hopefully, Jaimi feels comfortable opening up about her sexuality even more this season, normalizing the conversation for couples in a heterosexual relationship who may not otherwise have an accessible model for discussing it.