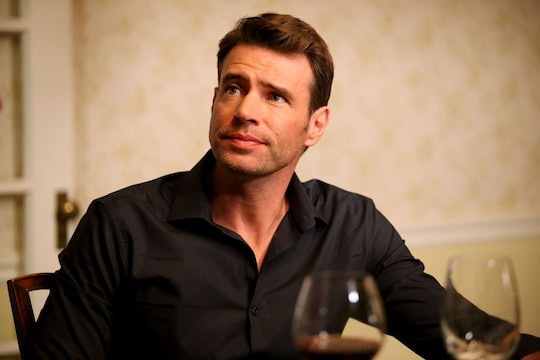 Jake Is Engaged On 'Scandal,' & He's Probably Got Something Up His Sleeve

Jake and Olivia have been on and off on Scandal for what seems like forever. Seems pretty typical for Olivia, as her relationship with President Grant followed a similar pattern. On Thursday's episode, however, we discovered something that might (and should) stop the Jake and Olivia ships in their path: Jake is engaged on Scandal, and it's not to Olivia.

In the beginning of the mid-season premiere, we saw that Jake and Olivia have rekindled their relationship once again. Olivia was out of the White House for good; Fitz was out and Jake was in. This did not last long, however, especially once Olivia found out that Jake is the new head of the NSA.

Partway through Thursday's episode, Jake made an unconventional and frankly terrifying entrance. He broke into Olivia's apartment and her bedroom while she was sleeping. He then forced himself onto her and continued to do whatever he wanted because she did not immediately say "no." When Olivia asked him what he was doing, he did not have an answer for her.

This was all weird and inexcusable behavior by itself, but then we learned that Jake is now engaged to a woman named Vanessa Moss. Vanessa is on screen for a grand total of five seconds, and we know really nothing about her besides that she is well connected in Washington D.C. and is supposed friends with Olivia's father. Like Jake, she is a pretty suspicious figure.

Despite deserving better, Olivia should also be suspect of Jake. What's more, Jake did not just break into her room — he broke into Mellie's. It's clear that he is hiding something. Olivia knows something is up, like the secrets behind how he became the head of the NSA, but her feelings for Jake might be getting in the way of any true investigating.

There are also other secrets besides how he got his position. Perhaps there was another reason for breaking into Olivia's apartment besides just wanting to be with her? And why did he break into Mellie's room? Jake claimed it was because he knew she was spying on him, but that does not warrant breaking and entering — well, nothing really does, but breaking and entering would not resolve the issue.

If Jake can hide a fiancée from Olivia and the Gladiators, he is most likely hiding darker secrets. Hopefully some are revealed as the rest of this season unfolds.